This Makeup Artist Addresses Every Female Stereotype In a Powerful Video 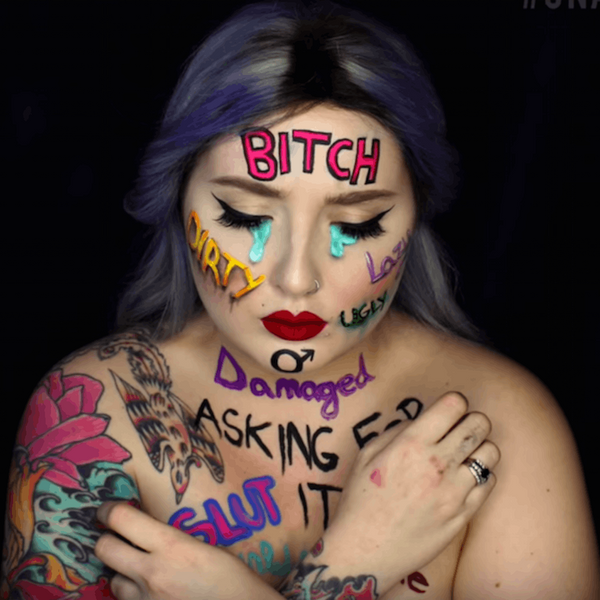 We try to do our part in promoting inclusivity, body positivity and generally learning how to love and be kind to yourself. It’s difficult out there in a world where Internet trolls roam free and feel at liberty to dissect the lives of women and female celebrities apart, leave hateful comments on YouTube videos and other awful practices that should have been left at the playground. Recently, Blac Chyna and Amber Rose attended the VMAs in outfits that literally turned the slander into clothing — a powerful way to throw the vitriol back into the face of the haters. Makeup artist Jordan Hanz, inspired by the two celebs, created an inspiring video called #UnattainableWoman to addresses the stereotypes and the haters.

Jordan addresses a lot of stereotypes, including when a “woman shows confidences, defends herself [or] shows a differing opinion than what someone else may have,” she’s portrayed extremely negatively. But, let’s be real, often when a woman exhibits these qualities, she’s actually a #girlboss.

She also mentions how women who wear makeup are viewed as doing it “clearly just to gain the attention of men, not because we love it for ourselves and love the art of putting it on.” Beauty vlogger NikkieTutorials addressed this same subject in her viral video from earlier this year about the “Power of Makeup” that encouraged women to post half done up selfies to show that they own their body image.

Finally, the video turns around and reminds us that as women, despite all the preconceived notions and prejudices, we do have agency in this world. She tells us that we need to empower one another and to “love ourselves, love every ounce of you.”

In her words, “We are ladylike as f–k, because we choose what that is. We are women.”

Check out the whole video below. (Warning: Contains NSFW language.)

What do you think of the message in this video? Tell us in the comments below!

Kimberly Wang
Kimberly Wang writes about all things pop culture, tech, style, and beauty. She's a Bay Area transplant and has an MFA in Creative Writing from Columbia University. On a sunny New York day, you can find her hanging out with her mini schnauzer Isabelle Jellybean on a blanket in Central Park.
Body Positive
Beauty News
Body Positive Kardashians Plus Size YouTube