Get Back to the Grind With Coffee + Typography Art 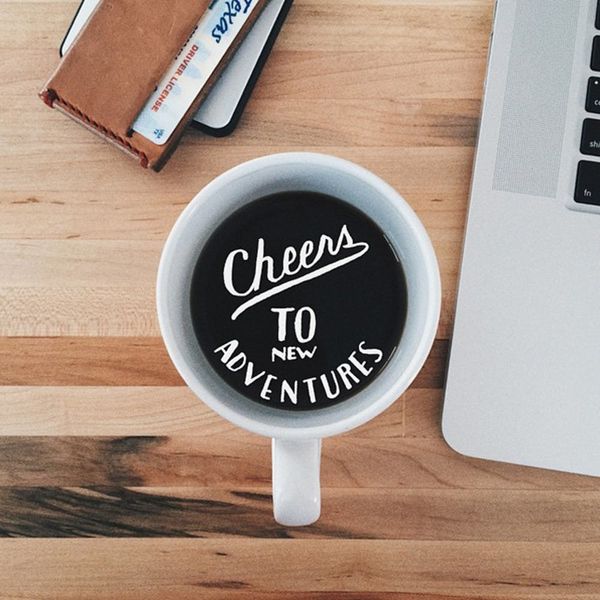 Well that was a fun holiday season filled with sweets, treats and only a few awkward family moments, right? Let’s do it again next year. Same time, same place ;) After you’ve finally recovered from that day-long NYE hangover and fully rebounded from the embarrassment of kissing a stranger you wouldn’t even swipe right for on Tinder, it’s time to indulge in a cup of coffee (and maybe another Advil or two) as you get back to the daily grind.

Instagram user, @joshuafortuna, is helping to make the transition this Monday a little easier with his #typeincoffee series. It’s basically like latte art but, dare we say it, better (and definitely more motivating).

Joshua Fortuna, a Dallas-based web designer at Stripes Agency, is all about hand-drawn typography and photography. As coffee is one of our fave things (a maker only has so much energy), we are pumped (with a double shot of espresso) he chose to highlight his cups of joe with these gorgeous hand-drawn phrases.

Joshua gave us a little background on his process for creating the shots that are a part of this series. He first decides what is inspiring him at the time, whether that’s a song, a design quote or even what he’s doing that day. Sometimes the place he decides to pick up his coffee can even be the inspiration for a shot. After getting his hands on a mug he takes a picture of the coffee straight down from above (with his iPhone 6 Plus).

After the coffee cup capture is complete, the hands-on work starts. Joshua finds something to trace a circle with, and lays out the type, drawing it with a Pilot Precise V7. After finishing his hand-drawn type he snaps a photo of it and inverts the colors to make it achromatic. Then the app games begin. First with Snapseed to push the contrast, then to Blender to lay the drawn type onto the coffee image and finally into VSCO Cam to color grade it (his go-to is HB2).

In addition to making coffee type pieces, Joshua also incorporates his love of hand-lettering into other aspects of his life with the same process as his coffee creations, only with new concepts. Like when he stumbled upon the Flatiron Building. Can we get a coffee table book of his travels ASAP?!

Joshua told us he was inspired to take on this series from two Instagrammers he follows. Instagram user @_louispena noticed Joshua’s consistency in his photos and they both collaborated on the hashtag name. Another Instagrammer, @spontaneousrapture, inspired him to make the stripe down his feed.

Not only does this designer indulge in a variety of roasts, he also uses various tools to create his hand-drawn type. From paintbrushes to Sharpies, he is busy between cups of coffee.

Sometimes he tends to get a little too real…

And just to keep things interesting, Joshua likes to switch it up every once in a while with a jolt of Vitamin C or tea for two. Other than black coffee, he told us his go to drinks are a dirty chai or a whiskey. Can relate.

Do you prefer your coffee with hand-drawn type of in the form of latte art? Let us know in the comments.