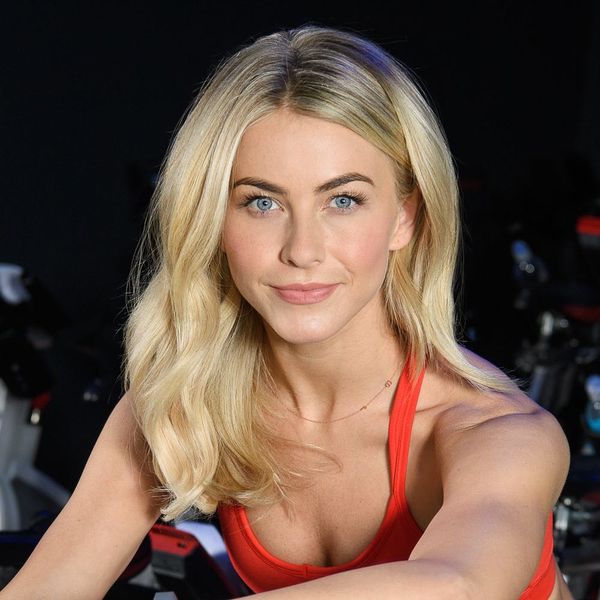 While Julianne Hough has been living it up in Cabo for her “beachelorette party,” we’ve been collecting all the healthy eating tips she’s dropped around the internet. Believe it or not, Hough’s a burgeoning health food guru — posting glorious recipes on her website, and regularly detailing her pre-wedding eats for anyone who wants to know. For the record: Hough doesn’t adhere to any crash course bridal diets, nor does she believe in changing herself for her wedding day. (Hear, hear!)

She told People that she doesn’t want to look any different than she normally would. (“If I get super hot for my wedding day and I’m not afterwards, and I’m not before, then it’s like, ‘Who is this person marrying my fiancé?’ or ‘Who’s my fiancé marrying?’”).

There are kick-ass salads, for starters — Hough is a big fan of Lori Zanini’s diabetic-friendly lemon garlic shrimp salad. She also noshed on a chicken salad for lunch in a food diary for People earlier this year that included cucumbers, hearts of palm, almonds, edamame, banana peppers, and olive oil and squeezed lemon — yum!

She gets her protein fix in the form of salmon, eggs (she takes ‘em over easy with avocado), and almonds, both in smoothie and chocolate-covered forms. She’s also great about eating her fruits and veggies, snacking on oranges, green juice with cucumber, spinach, kale, pear, celery, carrot, green apples, lemon, and Kourtney Kardashian’s detox go-to of beets.

Don’t count out the carbs! Hough dished to Us Weekly that they help her stay focused. “I have to have some sort of carb, whether it’s rice or bread or pasta or whatever it is, and not big amounts, but I do need carbs, because it makes my brain click on.” As she told Shape last year, those carbs also include plenty of pizza, which she says is her favorite food. (Not for dinner though — Hough told us in a recent interview that she tries to nix ’em as her last meal.)

Get a jumpstart on your week with this insanely creative Mexi-Cauli Rice recipe from @lorizanininutrition. It's delicious, it's healthy and it will make any meal more exciting. Get all the recipe details on the blog today! 🔗 in bio

Loving this recipe courtesy of @lorizanininutrition! It is so unbelievably delicious. If you want to impress your friends and family, this is it! Get the recipe details in the link in my bio. Bon appétit!

This Starshine Smoothie Bowl is as healthy as it is beautiful! I love this creation from @nutritionbykara. I'm not sure there could be a prettier way to start your morning! Recipe 🔗 in bio! ⭐️🍌🍈

Add in the 4-6 glasses of water Hough drinks every. Single. Day, and you’re well prepped to get Hough-ified.

And, of course, as she told People, a cheat day will soon be in order. “I’ll probably want to enjoy the night before [the wedding], have like beer and a burger, stuff like that.” She’ll make up for it, though: “If I have a cheat day, the next day I’m really good.”

What do you think of Jules’s eats? Tell us over @BritandCo.

Nicole Briese
Nicole is the weekend editor for Brit + Co who loves bringing you all the latest buzz. When she's not busy typing away into the wee hours, you can usually find her canoodling with her fur babies, rooting around in a bookstore, or rocking out at a concert of some sort (Guns N' Roses forever!). Check out all her latest musings and past work at nicolebjean.com.
Diet
Celebrity News
Diet
More From Celebrity News