Justice Ruth Bader Ginsburg Is Cancer-Free and People Are Rejoicing 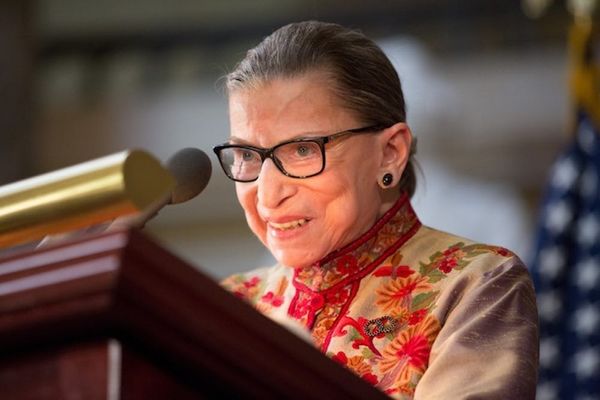 Supreme Court Justice Ruth Bader Ginsburg missed the court’s first day of oral arguments in 2019 this week, reportedly to rest from a cancer surgery in December. Her nonappearance made national headlines, as it was Ginsburg’s first such absence in 25 years on the SCOTUS bench, and raised some public concern and speculation over the beloved liberal justice’s prognosis. On Friday, the Supreme Court announced that Ginsburg’s absence is set to continue next week, as well — but there’s good news, too: Ginsburg, 85, has no remaining signs of cancer.

“Her recovery from surgery is on track,” said court spokesperson Kathleen L. Arberg. “Post-surgery evaluation indicates no evidence of remaining disease, and no further treatment is required.”

Ginsburg’s December surgery to remove two cancerous nodules from her left lung followed a hospitalization, in November 2018, after the octogenarian justice fractured three ribs in a fall. Prior to her most recent surgery, Ginsburg had been successfully treated for cancer in 1999 and 2009.

Ruth Bader Ginsburg’s health status has become something of a national preoccupation in recent years, particularly among left-leaning Americans who have come to count on Ginsburg’s liberal vote within an increasingly conservative court. Friday’s announcement of the justice’s cancer-free status sparked predictable sighs of relief among her supporters on Twitter:

She has had to be tough her whole life! Cancer had no idea who it was trying to beat! Congratulations, Justice Ginsburg!

Given that it was up against Ruth Bader Ginsburg, the cancer never really stood a chance. May she live a thousand years.

Saw @onthebasisofsex today and it is inspiring and makes want to get out make shit happen! #NotoriousRBG #onthebasisofsex #Ginsburg #RBG https://t.co/nYkwe2V82a

Beyond her judicial reputation, the history-making justice has also emerged as something of a pop icon — particularly since the 2015 publication of Notorious RBG: The Life and Times of Ruth Bader Ginsburg, a reverential biography by Irin Carmon and Shana Knizhnik whose title plays on the professional moniker of the late rapper (and Ginsburg’s fellow Brooklyn native) Notorious BIG. In 2018, Ginsburg was the subject of the documentary RBG, and a new Ginsburg biopic, On the Basis of Sex, is currently in theaters across the country.

Ginsburg, meanwhile, has maintained that she has no plans to retire anytime soon.