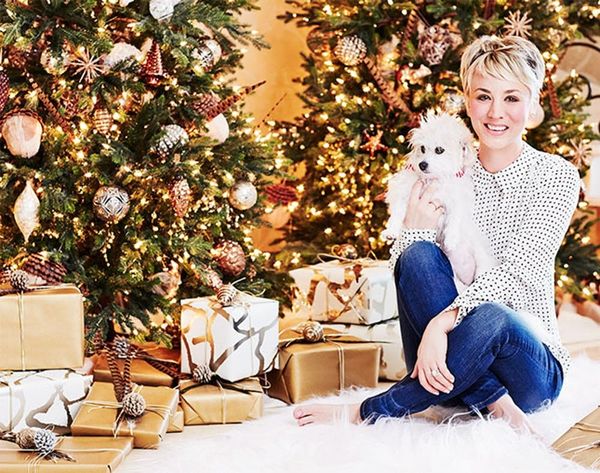 When she’s not hanging out with NASA nerds on her hit TV show, apparently Kaley Cuoco is working as a west coast correspondent for the North Pole. She might live in LA, but Kaley has still managed to turn her home into a stunning winter wonderland, which she showed off on one of our fave sites, Domaine! The actress and her interior designer, Jeff Andrews went all out this season, decking her Hollywood home in glitzy Christmas decorations.

Rather than dipping the house in red and green, the duo decided to go with a more elegant aesthetic. “Metallic tones like gold, platinum, bronze, and silver with white and green accents seem perfectly suited to her home,” Andrews tells Domaine. “Not overly traditional or childish — just chic and festive.”

Kaley’s home looks amazing but, obviously, the majority of us aren’t exactly lucky enough to have a personal designer come and deck out our home for holidays. There’s only one week left until Christmas, but if you’re feeling like your house needs a bit of a festive facelift before the relatives arrive, follow these decor DIYs that look a whole lot like the starlet’s, but for a fraction of the cost.

Frosted Pinecones: Rather than purchasing expensive, decorative pinecones, go for a stroll and pick up a basket full. Then brush Mod Podge on the tips and sprinkle epsom salt over the wet adhesive for a snow frosted look. (via Town and Country Living)

Animal Ornaments: Cuoco’s love of animals and nature inspired the choices in ornaments for the trees – woodland creatures in particular. By now, all the good ornaments will already be hanging on someone’s tree, so instead of battling the crowds, dig up some plastic toy animals and gold spray paint and turn those critters gold. Then drill a hole in the back, attach a hook and some ribbon and hang. (via City Farmhouse)

Gift Wrap Toppings: “I love gift wrapping. I hand-wrap every single gift with tons of different trinkets,” Kaley says. “I like to add ornaments to the top of the wrapping, so it’s a little extra gift on top of the gift.” If you want to step up your gift wrapping game, try out this tutorial, which shows you how to create glittered clothespin gift toppers. Or, follow Kaley’s lead and make a few extra gold animal ornaments to tie onto your presents. (via Creature Comforts)

Cortney Clift
Cortney is the senior writer and special projects editor at Brit + Co. She typically covers topics related to women's issues, politics, and lifestyle. When she's not buried behind her computer you'll find her exploring New York City or planning her next big adventure.
Christmas
Party
Christmas Interior Design