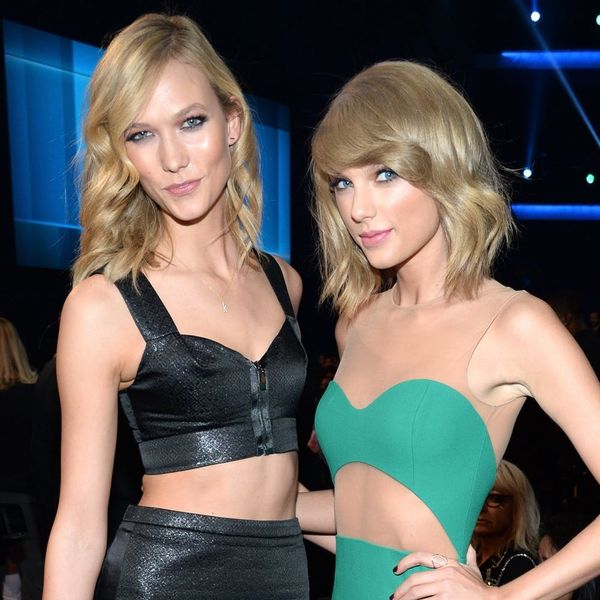 Karlie Kloss is here to prove you can’t believe everything you read! The supermodel, who once walked Victoria’s Secret runways and covered Vogue with her BFF Taylor Swift, has been reportedly growing apart from the singer for some time now, but if her social media is any indicator, that’s definitely not the case.

Fans first pointed to potential signs of trouble between the two after Swift wore a t-shirt in her “Look What You Made Me Do” video listing the names of her various squad members, from which Kloss was noticeably absent.

Fuel was added to the fire when Swift reportedly declined to be filmed for the model’s new series, Movie Night with Karlie Kloss, citing scheduling issues.

Today, on her pal’s 28th birthday, however, Kloss took to Instagram to post a sweet message that painted a very different picture of the bosom buddies’ relationship than the one that’s being circulated.

“Happy happy birthday @taylorswift! 💫,” she wrote on a pic of herself and the birthday gal. Hanging out together in a car with desert scenery soaking up the rays in the background, the two look absolutely lovely with their minimal makeup, like a scene straight out of a movie.

Fans were totally into the public show of #friendshipgoals, leaving comments like “MY KAYLOR FEELS 😍😍😍😭😭😭💞😍😘” and “I’M NOT CRYING YOU ARE.”

Swift’s other BFF, Selena Gomez, who cited the singer as the best thing to come out of her former relationship with Nick Jonas, also posted a super sweet tribute to the “Getaway Car” singer, writing, “I’m glad you were born. You write all the thoughts some aren’t able to articulate. (ME!) Thank you for giving a voice to this world that is authentic and inspiring. I wish some knew how big your heart actually is.. It’s fierce, bold, and wild with light. I’m glad you protect that. Love you @taylorswift.”

I’m glad you were born. You write all the thoughts some aren’t able to articulate. (ME!) Thank you for giving a voice to this world that is authentic and inspiring. I wish some knew how big your heart actually is.. it’s fierce, bold and freaking wild with light. I’m glad you protect that. Love you @taylorswift

Looks like T-Swift’s squad is fully intact, after all!

Are you happy that things seem to be friendly again between Karlie Kloss and Taylor Swift? Let us know @BritandCo!

Desiree O
Desirée O is a ‘Professional Bohemian’ who loves anything and everything related to the arts, entertainment, and pop culture. She ADORES being a ‘Newsy’ for Brit + Co, covering all of the latest tidbits of awesomeness that you want to read about. When she’s not writing, she’s either making messy art, going on long adventurous walks with her camera, or poking around over at bohemianizm (http://www.bohemianizm.com/). You can find out about Desirée O and her work at http://DesireeO.com/ or follow her on Twitter @DesireeO.
Celebrities
Celebrity News
Celebrities Friends Taylor Swift
More From Celebrity News