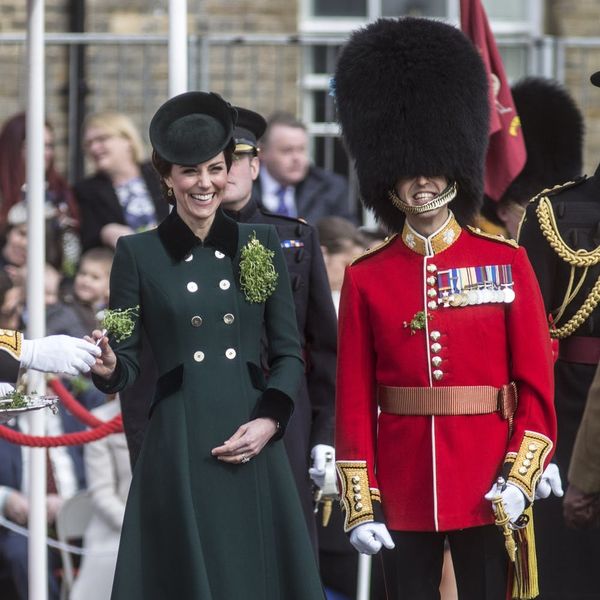 Kate Middleton is definitely a style inspiration, with her luscious locks and killer royal style that always plays to a theme. (She’s even inspired cafes!) She didn’t disappoint when she stepped out in London for a St. Patrick’s Day parade in an all-green ensemble to honor the Irish Guards.

The Duchess of Cambridge wore a bespoke green coat with a black velvet collar and cuffs, and gold military-style buttons down the front. She also wore a green hat, green heels, a shamrock pin (made with real shamrocks! No gaffes here), and emerald earrings by Monica Vinader.

The striking coat dress was by French designer Catherine Walker, who was also a favorite of Kate’s late MIL Princess Diana. (Middleton kept the piece on, but let her hair down, as she arrived in Paris later that day, in keeping with her trend of wearing clothing by designers from the countries she’s visiting.)

After the St. Paddy’s Day parade, she and Prince William celebrated with, what else, pints of Guinness. They also met with soldiers and their families at the barracks, where the longest-serving Guardsman gave a toast thanking the Duchess for her support and praising Prince William for his role as the first royal colonel.

What do you think of Kate Middleton’s thematic outfits? Tell us @BritandCo!

Shea Lignitz
Shea can be found in the nearest bookstore or brewery, exploring the great outdoors, or blasting Led Zeppelin. She grew up in the cold and rain of Northern California's redwoods but is currently wandering around Texas.
Celebrity Style
Celeb Style
Celebrity Style Kate Middleton Royal Family St Patricks Day