What You Need to Know About Kids and Screen Time 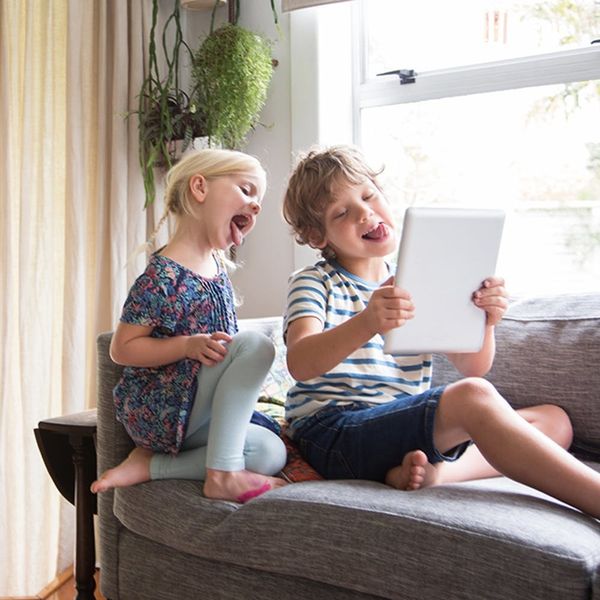 Screen time: On some days research says it's okay-ish, but on others… well, it goes from acceptable in moderation to borderline villain. While experts, such as the American Academy of Pediatrics (AAP), routinely publish recommendations, most parents aren't sure just how much screen time they should be allowing their kids. So what do you really need to know about screen time? Check out what science has to say about it.

2. Pre-bedtime screen use is not okay. A recent report from the UK's Royal College of Pediatrics and Child Health (RCPCH) found that while screen time, in general, doesn't exactly harm children, it's not at all helpful in the hour before bedtime. The RCPCH recommends that parents nix screen use during this time, to allow their kids to get better sleep.

4. Screen time may, or may not, affect well-being. Mental health, fitness level, and other indicators of a child's general well-being are at the heart of screen time research. But, according to the RCPCH report, the evidence that tech use causes negative well-being isn't 100 percent. While some evidence does point to negative health and cognitive and emotional consequences as a result of screen time, more research is necessary. In other words, there are no pure facts here.

5. Screens may affect a child's brain. The National Institutes of Health's (NIH) Adolescent Brain Cognitive Development (ABCD) Study recently released their first wave of data. With 11,874 nine- to 10-year-olds being studied across 21 research sites, this large-scale study has already unearthed some pretty interesting data about children, screens, and brain development. According to the study, participants who played seven or more hours of video games a day had a premature thinning of the cortex in the brain (this eventually happens — just not until a little later). What does this mean? Well as of now, scientists don't know. So yes, screens make a difference. But the ABCD researchers aren't quick to say what the implications are for child development.

6. Avoid using screen time as a reward. A recent study from the University of Guelph found that when parents use screen time as a reward, they tend to increase the overall usage. So if you're trying to reduce or minimize your kiddo's tech-time, don't use TV programs, video games, apps, or anything on the internet as a reward for good behavior.

7. Your screen time affects your child's screen time. The same study from the University of Guelph also found that the more time a parent spends in front of a screen, the more time a child does — especially for mother-child pairs.

8. Do what's right for your child. Every child is an individual. What works for your BFF's four-year-old won't necessarily work for your toddler. While age-graded screen time guidelines such as the AAP's certainly serve as a trusted reference, your child may need some wiggle room — depending on how, why, and when your child uses their tech-time.

From Your Site Articles
Erica Loop
Erica Loop is a freelance writer living in Pittsburgh. When she's not busy creating kids' activities for her blog Mini Monets and Mommies, you can find her trying to hang out with her teenage son, being chased by her two Olde Boston Bulldogs or teaching a children's karate class (she's a third degree black belt!).
New Moms
Moms
New Moms New Parents Parenting
More From Moms