2 Major Celebrity Hair Transformations That Might Inspire Your Next ‘Do 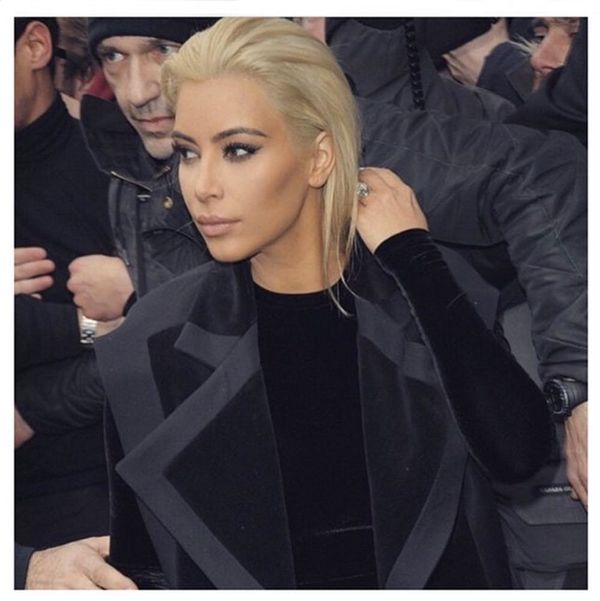 We’re used to celebrities switching up their haircuts and colors in the blink of an eye (or a quick refresh of your Instagram feed), but it always catches us off guard when stars ditch their signature looks — ones so distinctive that they’ve come to define their whole style — for something completely different. This week, two celebrities did just that, and they’re barely recognizable after indulging in what might be the newest celeb hair trend: going platinum blonde.

The first shocker: Kim Kardashian, who hot on the heels of chopping off her hair into a sleek lob debuted platinum locks today at Paris Fashion Week. While this isn’t the first time Kim’s ever lightened her natural jet black hair, it is the most blonde (verging on white) her hair has ever been. But what’s more surprising: Kim’s colorist, Lori Goddard got it that light in just one try. As a dark brunette who has also dyed her hair platinum (#first) — and sat in several salon chairs for over six hours at a time with a full head of bleach, various heat sources beamed at my dome to aid the color stripping, plus follow up toning — that’s pure magic. Believe Kim when she says she has the best beauty team around.

Kim’s new ‘do is remarkably striking, and absolutely works with her new found fashion-forward sensibilities. The platinum hue contrasts with her olive skin tone in a strangely beautiful way (speaking of contrast, we love that she left her eyebrows just-as-dark as before), and the way it’s styled — almost in a faux undercut, a hairstyle we’ve seen a fair bit of on the red carpet as of late — makes the switch feel especially modern. Watch out for some extra-smiley selfies in Kim’s Insta profile, you know, just incase she embraces the whole “blondes have more fun” mindset.

The second OMG-worthy makeover goes to Jared Leto, who snapped a selfie of his slicked back, white-blonde hair en route to Paris Fashion Week. Wearing a high white turtleneck, blazer and aviator sunglasses, the Oscar winner looks like what would happen if Joe Biden and Karl Lagerfeld had a baby. In other words, not terribly cute.

It’s the second strike Jared’s made in the hair department this week. Yes ladies, his hair isn’t pulled back in that pic. ICYMI Jared chopped off his man bun earlier this week. But maybe it’s better to not know what he’d look like with flowing, platinum locks.

What do you think of Kim + Jared’s new color? Would you ever dye your hair platinum? Tell us in the comments below.