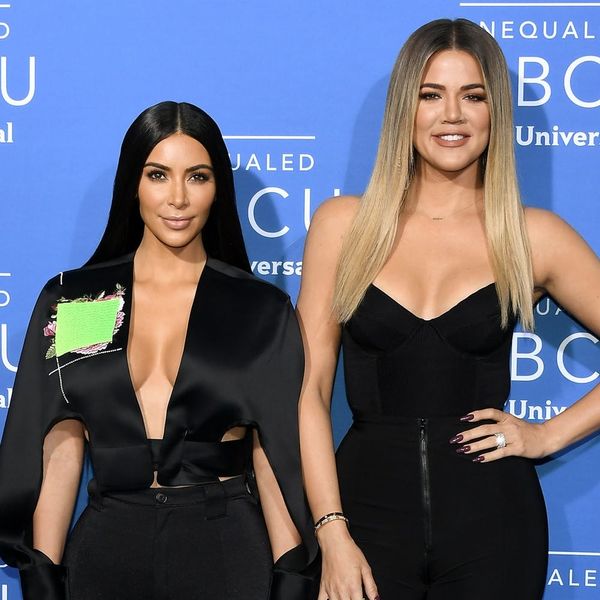 Take one look at the headlines and it’s clear that the Kardashian-Jenner sisters never shy away from switching up their hair color, cut, and style. The latest evidence? A shockingly short crop worn by not one, but two of the famed reality stars.

In what seems to be the latest family affair, both Kim Kardashian West and Khloé Kardashian have said goodbye to their shoulder-surpassing strands in favor of a cooling, coordinating crop just in time for the dog days of summer. And, if we’re being honest, we’re here for it.

Khloé was the first to make the cut, opting for a cool-girl angular bob that first gained popularity in the ’90s, but is back to reclaiming fame here in 2018. As a reference, here’s what the 34-year-old was sporting earlier this month.

Then, she went all in, showing off the sleek blunt bob given to her by her longtime stylist Justine Marjan in a serious selfie on July 27.

“Not smiling makes me smile” Kanye

It seems that her big sister was inspired by the crop, considering just days later Kim followed suit and ditched her extensions in a major way. Here’s the before, from July 15.

And the seriously-sleek after, which she showed off at a charity event on July 29th alongside Khloé, mom Kris Jenner, and sister Kendall Jenner.

Kim’s cut, brought to life by her longtime stylist Chris Appleton, appears to be slightly shorter than Khloé’s, but no less stylish. “The inspiration was 90s swishy glass like-hair,” the Color Wow Global Creative Director said in a statement. “I wanted to create a really intense shine and for the hair almost to look like a wig it was so perfect. I cut the hair shorter than we’ve ever done before, just underneath Kim’s jaw line, keeping the cut like blunt with no angle.”

No word on how long these blunt bobs will stick around, but they’re certainly perfect for the sweltering days of summer ahead.

What do you think of Kim and Khloé’s summer switch-up? Share with us over @BritandCo.

Arielle Tschinkel
Arielle Tschinkel is a pop culture junkie who went to NYU because the Olsen twins went to NYU (really). She is a freelance writer whose work has also been featured on HelloGiggles, Refinery29, SheKnows, Bustle, Hollywood.com, and many others; and she's living her dream one Britney Spears GIF at a time. Follow her on Twitter @mrstschinkel or visit her website at arielletschinkel.com.
Beauty Trends
Beauty News
Beauty Trends Celebrity Beauty Celebrity Hair Hair Trends Haircuts Kardashians Short Hair
More From Beauty News