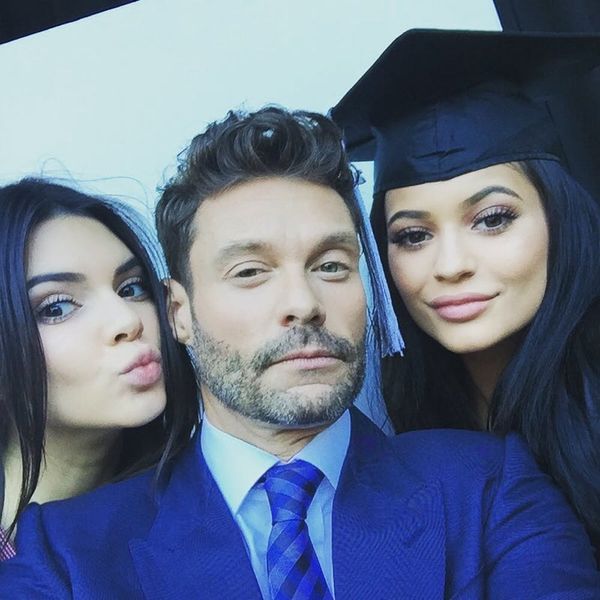 Apparently everyone’s favorite American Idol host, radio personality and producer (you may have heard of a little show called Keeping Up With the Kardashians) is also one heck of a party planner. Ryan Seacrest threw a surprise graduation party for Kendall and Kylie Jenner last night and we’re sufficiently jealous we weren’t invited. Thanks goodness the Kardashian-Jenner clan gave us a play-by-play of the entire night on Instagram. Naturally.

It started with Kylie capturing the big surprise and sharing it with world. (via @kylizzlesnapchats)

Then the host and honored guests (Kendall graduated in ’14 and Kylie this year) took a selfie together (and OMG loving the graduation cap!). (via @ryanseacrest)

Kylie, of course, had to take a break for a solo photo sesh with her diploma (proof!). (via @kyliejenner)

And then Kylie revealed that the most epic thing that ever happened: Synchronized swimmers. (via @kylizzlesnapchats)

Kim got playful with Kendall and her bestie Gigi Hadid in an essential addition to every party: a photo booth. (via @kimkardashian)

And then all five Kardashian-Jenner sisters took a group photo before calling it a night. Presh. (via @khloekardashian)

Overall it looks like it was a super fun night for everyone. Well done, Seacrest! If this whole TV hosting thing doesn’t work out for you (it is the last season of American Idol, after all) we think party planning is an excellent back-up plan.

We want to know what you think looked like the most fun part of the the Seacrest-hosted bash. Tell us below in the comments!

Lauren Smith
Lauren is a midwesterner at heart, living and writing in NYC. When she's not behind her computer you can find her splurging on delicious food, reading the latest pick from her book club and almost always wearing chambray.
Graduation
Party
Graduation Kardashians