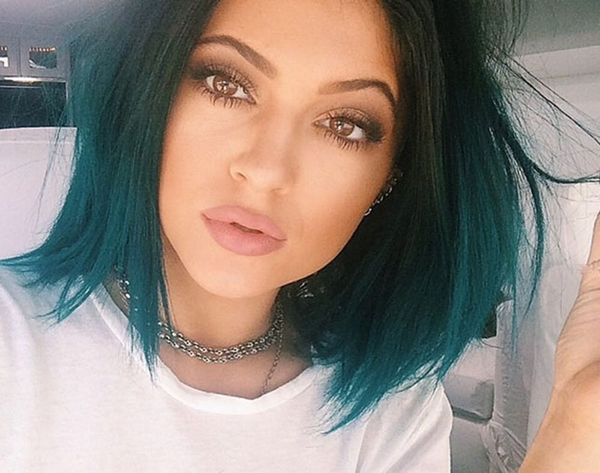 Kylie Jenner is quickly making a name for herself as a Cool Girl with a capital C + G. Besides acting like she’s standing in the shadow of no one, including her supermodel sister Kendall Jenner and her half-sister Kim #BreakTheInternet Kardashian West, the 17-year old reality TV star isn’t shy about putting her unique spin on everything. From how she lines her plumped-to-perfection lips to the way she nails ‘90s vixen style, Kylie’s developing her own image and documenting it one edgy selfie at a time. As those Instagrams show, one thing Kylie hasn’t settled on is a signature hair style. Tresses go from short to long and from jet black to teal blue in just a few snaps, and they all seem to suit her. Clearly we’re no help in the matter here, as we’re hoping Kylie continues to switch up her hairstyles, which in turn give us non-stop inspo (with the launch of her designer extensions in the near future, that seems to be just what we’re in for). Scroll through to see 12 times the Kardashian klan’s best hair chameleon won us over with her ever-changing locks.

1. Natural Black Extensions: When Kylie opts for long layered hair, her Kardashian roots shine through, but in a more wild-child way than, say, Kim’s flowing mane, thanks to those choppy layers. Paired with those fanned lashes, this look is pretty much perfection.

2. Gray Goth: Kylie is one of the only girls we know who can go gray so effortlessly. The cloudy fade doesn’t seem that extreme on her jet black locks. It’s a look we hope we’ll get to see more than just on Halloween.

3. Down-to-There Blue: Long-hair-don’t-care Kylie turns up her mile-long locks with straight-across-blue hair extensions. If this is what we can expect from her hair extension brand, well be first in line.

4. Short and Wavy: Kylie’s version of a wavy bob is the definition of day-after glam, thanks in no small part to those femme fatal brows. The cat claw nails really complete the look.

5. Half Top Knot: If you needed proof Kylie’s on the Cool Girl track, she was rocking this now-trending hairstylefive months ago. Sure, she doesn’t own the catwalk, but that doesn’t mean she’s not a trendsetter in her own right.

6. Hat Hair: This is how you wow in a beanie. Flat-ironed faux layers peek from under her dolled-up beanie, while a tight fishtail braid glides down her neck — don’t forget the blingy hair pin. It’s you’re new go-to snowy weather look.

7. Teal Dip: This might be as close to a signature ‘do as Kylie gets. While everyone was going pink and lavender, she opted for a punky teal dip that looks as cool on a casual day as it does on the red carpet.

8. Black to Blonde: Kylie owns this harsh dye job, making it a style as covetable as a natural-looking slow burn.

9. Easy Ombre: This light-all-over look gives softness to Kylie’s tough girl vibe and we have to say, she should show this sweeter side more (we’re rooting for more peachy pouts and easy-on-the-mascara lids, too).

10. Brown Auburn: Kylie’s olive skin radiates with an auburn-tinged dye job, adding an air of luxe to her #LazyGirl look instantly. Plus, those bronzed cheeks take it to another level.

11. Baller Waves: You can’t be a part of the Kardashian family without knowing how to ace bombshell waves. Kylie’s capped version keeps her curls from being too pretty (although they’re still soooo pretty).

12. Braided Pigtails: This style is a perfect balance of youthfulness and girl-grown-up, with a duo of French braids amping up traditional pigtails in the chicest way possible. We’ll toast to that!

Which of Kylie’s hairstyles has got you itching to switch up your locks? Tell us which style was your favorite (and which you want to see more of!) in the comments below.