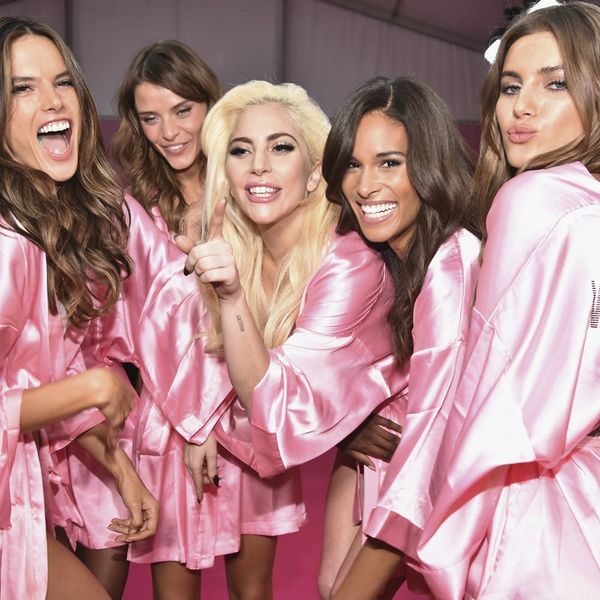 There’s just three days left before we get to see Alessandria Ambrosio, Adriana Lima, Jasmine Tookes, Kendall Jenner, Bella and Gigi Hadid (in wings, no less!) work it on the runway at the 2016 Victoria’s Secret fashion show in Paris.

But as excited as we are to see all the gorgeous ladies do their thang, we’re just as pumped (if not more so) to see Lady Gaga perform.

Having recently released her fifth album, Joanne (which, we must confess, we LOVE), Gags is back and doing better than ever following her broken engagement with Taylor Kinney — at least in the musical sense.

The pop superstar recently admitted in an interview with CBS Morning that, while she’s enjoying greater freedom in her career these days, she’s also a little… lonely, telling the interviewer that she really just “misses people.”

Luckily, she made a few new friends this weekend — make that 51 of them, actually! — in the Victoria’s Secret models.

“She really fits right in with us,” Alessandria told E!.

We’ll say! Just look at her chumming it up with the gals as they jam out to her new single, “Million Reasons!”

We have goosebumps…watch the hottest #VSFashionShow moments, starring @ladygaga & the Angels! Full video on youtube via profile link.

To show her appreciation of her new lady gang, Gags reportedly stood backstage waiting for each and every one of them in order to gift them with a single rose before she departed. “She waited for each of us,” Lily Aldridge told E!.

What a sweetheart. Better move over Tay — looks like there’s a new squad in town!

Who are you most excited to see perform Monday night? Tell us over @BritandCo.

Nicole Briese
Nicole is the weekend editor for Brit + Co who loves bringing you all the latest buzz. When she's not busy typing away into the wee hours, you can usually find her canoodling with her fur babies, rooting around in a bookstore, or rocking out at a concert of some sort (Guns N' Roses forever!). Check out all her latest musings and past work at nicolebjean.com.
lingerie
Celebrity News
lingerie Music Victoria's Secret
More From Celebrity News