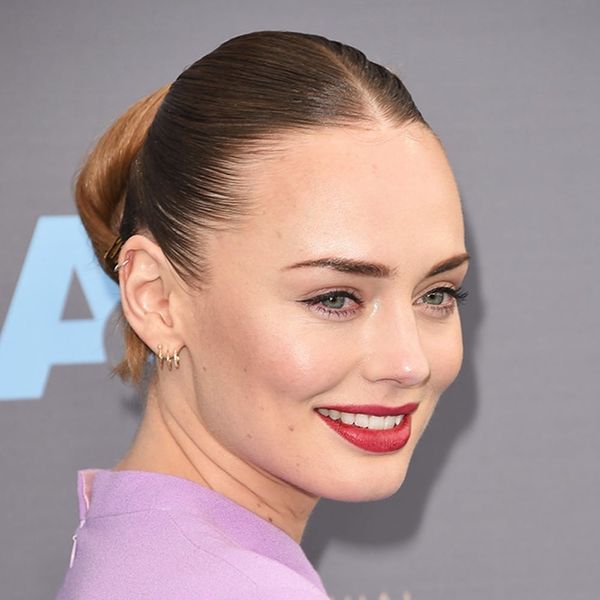 The Critics Choice Awards’ red (blue) carpet was full of celebs wearing understated looks when compared to the Golden Globes, where rainbow dresses and punchy colors stole the show. While black, white, earthy hues and powdery blues proved the stars were feeling a bit more minimalist this time around, one actress’ super bold hairstyle definitely stood out for its creative style.

Laura Haddock, who was up for her role in Luther for Best Supporting Actress in a Movie Made for Television or Limited Series, stepped out on the red carpet wearing a sleek updo with her hair in a thick, rope-like twist that was secured with two gold hair combs. The conceptual ‘do had a slightly futuristic vibe that paired well with her brightly colored dress (with front pockets!).

After parting your hair down the middle and slicking it back (hint: this hairspray hack can help), divide your hair into two sections: one above your ears and one with the remaining hair below it. Tie the bottom section into a ponytail that’s level with your ears. Then, with the top half of hair, twist your hair into a loose rope shape so it connects (and incorporates into) the bottom ponytail. Keep it in place with a hair comb at each end and you’re set. Who said hair combs were out of style?!

What do you think of Laura’s look? Tweet us @BritandCo!