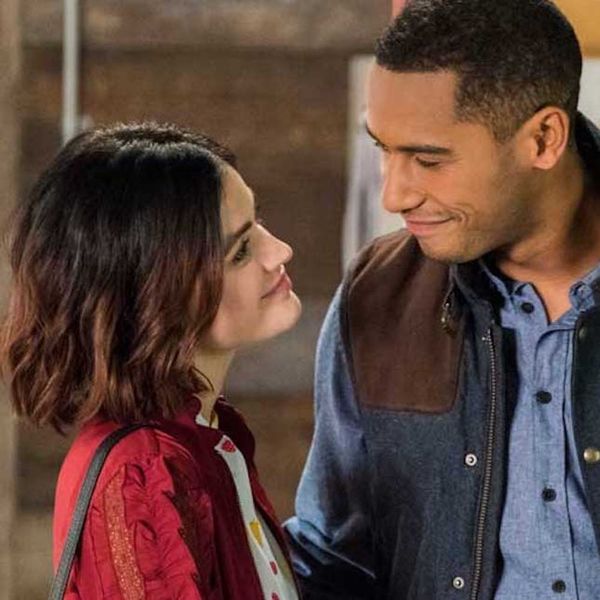 Things are getting real in a hurry for the Abbotts since Stella (Lucy Hale) got her Life Sentence. She’s cancer-free, so now it’s time to start living her life — except her entire family lied to her about all this bad stuff while she was sick, and now all of that is coming to the forefront.

Let’s start with Stella and her husband, Wes (Elliot Knight), who got married after knowing each other for less than a month. Now immigration services are looking into their marriage because it looks like maybe Wes was using Stella to avoid deportation.

We all know that’s not the case, but it certainly doesn’t look great that they got married so quickly and Wes knew his wife was dying of cancer. So, Stella and Wes have to study up on each other in order to pass the immigration test questions, which leads to a rather ridiculous exchange where Wes reveals he’s slept with 11 people and Stella yelps, “Were you a prostitute?!”

Um, Stella? Slow your roll. First of all, don’t slut-shame your husband. Also, 11 people is not, like, outrageous.

The much bigger, over-arching problem is within the Abbott family, specifically mom Ida (Gillian Vigman). She seems to have almost entirely moved on from basically her whole family, ready to sell the house and live happily ever after with her new girlfriend, Poppy (Claudia Rocafort). But selling their childhood home is really hard on all the kids and their father, and they all think their mother is being really self-centered until she breaks down crying about how awful this house was for her — it’s where her marriage fell apart and her baby got cancer.

Ida is also very concerned about digging up their cat, Baboo, before someone buys the house; it turns out that everyone lied to Stella about Baboo dying of — you guessed it — cancer, which strikes Stella as immensely funny.

That’s definitely the big stuff this week, although Aiden’s relationship with his father, Paul (Dylan Walsh), is certainly interesting. Aiden (Jayson Blair) feels completely neglected because of Stella’s illness, and it’s why he has basically spiraled downward into having no job and sleeping with married women. He comes around to the idea of being a good father to Marlene’s baby awfully fast — I wish they could have slowed that down and done it over the course of several episodes — but I’m excited to watch him try to repair his relationship with his dad while he becomes a father himself. Nice parallel there.

I also hope this means more Marlene (Alyshia Ochse). Aiden’s ditzy baby mama is a hoot — “I’m going to have a baby with my drug dealer! Oh my god, I’ve finally become my mother.”

Finally, the seemingly perfect Abbott sibling, Elizabeth (Brooke Lyons), is having her own troubles. She can’t seem to get started pursuing her dream of becoming a writer, but the bigger problem (and one the show has only hinted at) is that she really seems to resent both her husband and their kids for infringing on her life plans. Not that she doesn’t love them — clearly, she does — but she never meant to have kids so early, and it really changed her path in life. Luckily, Stella and Elizabeth’s husband, Diego (Carlos PenaVega), are ready to take over kid duty so Elizabeth can go to a writer’s retreat. It’s a nice-yet-temporary fix, so it’ll be interesting to watch how Elizabeth comes to grips with the resent she harbors for her family.