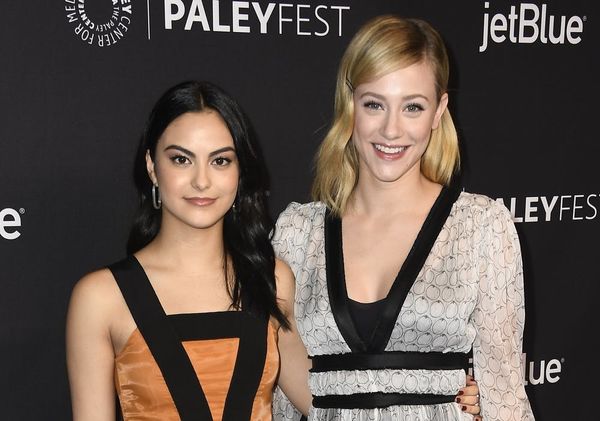 Riverdale star Lili Reinhart has been very clear about the fact that she doesn’t want to discuss her rumored romance with costar Cole Sprouse in the press. But she did open up about the bonds of friendship she’s forged with him and their other castmates — including, especially, Camila Mendes — in a new interview with Who What Wear.

“It’s kind of like the cast of Friends; they did that together,” she said of how Riverdale‘s sudden success united the cast of relative newcomers. (Of the CW show’s young stars, Sprouse was the most well-known when the series premiered in 2016.) “I think that’s a bond that [the Riverdale cast] has created as well and you just don’t let go of. I’ve made friends in this show that I will have hopefully until the day I die.”

Reinhart specifically singled out Mendes, putting to rest any rumors of tension or rivalry between her and her on-screen BFF. “Cami and I have held hands through this whole thing, which has been really amazing because we were both put on the same pedestal together. It’s really wonderful to have someone to go through that with.”

She was a little more guarded when talking about Sprouse. “I think it’s just that I’m so protective over it. It’s not something the world needs to know about, because if you give them anything, they are just going to want more,” she explained.

She did speak a little about the art they make together, though. Sprouse, who’s a talented photographer as well as an actor, often takes pictures of Reinhart and his friends, some of which he posts to Instagram. “I think he is such an incredible photographer, really. Sometimes he’s inspired by a location, and he’s like, ‘I want to shoot you here.’ Other times, I’m inspired by a dress, and I’m like, ‘I want you to shoot me in this,'” she said. “Our photo shoots are very intimate, just him and me; no one else is there ever.”

Riverdale season 3 premieres on Wednesday, October 10 at 8pm ET on The CW.

Do you have friends that have stuck with you though big life changes? Let us know@BritandCo!

Desiree O
Desirée O is a ‘Professional Bohemian’ who loves anything and everything related to the arts, entertainment, and pop culture. She ADORES being a ‘Newsy’ for Brit + Co, covering all of the latest tidbits of awesomeness that you want to read about. When she’s not writing, she’s either making messy art, going on long adventurous walks with her camera, or poking around over at bohemianizm (http://www.bohemianizm.com/). You can find out about Desirée O and her work at http://DesireeO.com/ or follow her on Twitter @DesireeO.
TV
Celebrity News
TV
More From Celebrity News