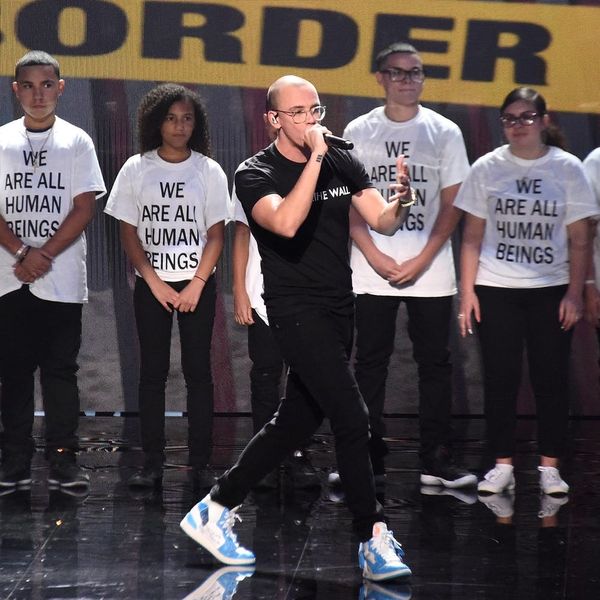 Logic is two for two in emotionally rich and socially important MTV VMAs performances. The rapper (real name Sir Robert Bryson Hall II) used his Monday, August 20, performance at the 2018 awards show in New York to shine a light on an important issue: the immigration policies that are seeing families ripped apart either while trying to cross the border or due to new, strict deportation rules.

Logic was joined onstage by Ryan Tedder and several families who have been affected by the US’ current immigration policies. All of the families are members of three immigrant-led, US-based organizations: United We Dream, Families Belong Together, and Make the Road NYC.

Each of the guests wore a t-shirt with the words, “We are all human beings.” Logic himself wore a shirt reading, “F*ck the Wall.” Initially, there was a screen separating the kids from their parents, but halfway through the performance, the screen was lifted, and the families reunited at the front of the stage.

Among those onstage was the family of Manuel Arpi. Arpi is currently being held in a detention center in New York after migrating from Ecuador as a minor in 1995. He was detained and released at the time, and started a life in America, undocumented. According to United We Dream, Arpi’s initial detention in the ’90s resulted in a removal (deportation) order, and he was taken from his home by ICE agents in late 2017. He is awaiting deportation away from his wife and two sons.

Arpi’s story was one of many shared by United We Dream after Logic’s performance. “This is Jose Saeteros with his family,” the organization tweeted. “Tonight you saw his family onstage at the #VMAs, but on Friday, Jose was deported. This is the face of family separation. This is why we fight. #FamiliesBelongTogether”

Logic also used his 2017 performance to send an important message. During last year’s telecast, he performed his anthem “1-800-273-8255” with Alessia Cara and DJ Khaled. The anti-suicide song was named after the phone number to the Suicide Prevention Hotline, and immediately after that performance, the hotline saw a spike in calls.

If you missed the performance, but would like to get involved, the organizations that Logic highlighted during tonight’s performance are asking fans to text HERETOSTAY to 877877.

What did you think of Logic’s VMA performance? Tell us @BritandCo!

Kat Armstrong
Kat has been a writer, social media maven and mom for longer than she's willing to admit. She's also spent time in front of and behind the camera, interviewing celebs, politicians and acting as a producer for fashion and artistic photography shoots. When she isn't writing for various orgs and publications, she's hanging with her kids, husband and French Bulldog, Peter, in Toronto, Canada.
Awards Shows
Music
Awards Shows Music VMAs