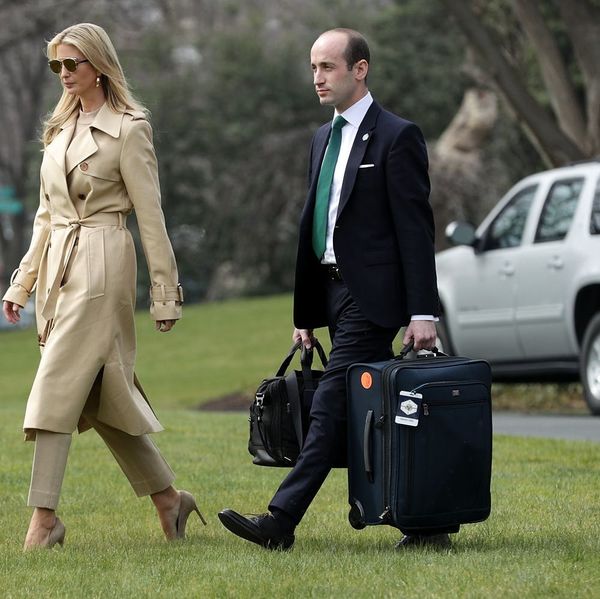 If the name Stephen Miller isn’t very familiar to you, his policies are. Miller is the senior White House adviser who is reportedly driving the White House’s policies on immigration. Since early 2017, the 32-year-old Miller has overseen deportations, child-parent separations and detentions, and the majority-Muslim travel ban. Just last week, NBC reported that Miller had endorsed a policy that would make it even harder for immigrants to become US citizens. Now, a new op-ed calls out the Trump administration’s identity-driven immigration policies in light of the author’s own family history — and the author happens to be the uncle of Stephen Miller.

In an op-ed for Politico, David S. Glosser (brother to Miller’s mother, Miriam (Glosser) Miller) recounts the family’s humble beginnings on Ellis Island at the turn of the last century, and how they overcame Antisemitism, language barriers and used “chain migration” (a term the administration often uses as a dog whistle to scare people about how immigration will destroy the country) to ensure their entire family could get a better, more prosperous life in America.

According to Glosser, Miller’s great-great-grandfather, Wolf-Leib Glosser fled Antopol, Belarus in order to avoid anti-Jewish pogroms and forced conscription into the Russian army. With little money, the Glosser patriarch arrived in the US, and was soon followed by one of his elder sons, Nathan. The father and son worked tirelessly to pay off their family’s debts in order to secure the remaining Glossers’ passage to America.

Within two generations, the Glossers (who faced intense Anti-Jewish prejudice both at home and Stateside) owned a chain of grocery stores, a high-end department store (Glosser Brothers) and discount department stores, employing thousands of people over the years. The company did so well, in fact, that it was publicly traded and lasted for over 80 years before being purchased by Value City in the 1990s.

“I have watched with dismay and increasing horror as my nephew, who is an educated man and well aware of his heritage, has become the architect of immigration policies that repudiate the very foundation of our family’s life in this country,” Glosser writes.

“I shudder at the thought of what would have become of the Glossers had the same policies Stephen so coolly espouses— the travel ban, the radical decrease in refugees, the separation of children from their parents, and even talk of limiting citizenship for legal immigrants— been in effect when Wolf-Leib made his desperate bid for freedom,” he writes.

“The Glossers came to the US just a few years before the fear and prejudice of the “America First” nativists of the day closed US borders to Jewish refugees,” Glosser continues. “Had Wolf-Leib waited, his family would likely have been murdered by the Nazis along with all but seven of the 2,000 Jews who remained in Antopol. I would encourage Stephen to ask himself if the chanting, torch-bearing Nazis of Charlottesville, whose support his boss seems to court so cavalierly, do not envision a similar fate for him.”

Glosser goes on to link the family’s story to those of the people he’s met in his volunteer capacity as a neuropsychologist for the HIAS (formerly the Hebrew Immigrant Aid Society), which Glosser describes as “the global non-profit agency that protects refugees and helped my family more than 100 years ago.” He describes people who, like his great-grandfather, hope to make a better, more peaceful life for their families in America: a former child soldier who still suffers from PTSD due to the torture he faced in Eritrea; Central Americans fleeing deadly gang violence and corrupt governments; and an escaped kidnap-bride who will be returned to her arranged marriage if she gets deported back to central Asia.

“President Trump wants to make us believe that these desperate migrants are an existential threat to the United States; the most powerful nation in world history and a nation made strong by immigrants,” Glosser writes, arguing that the current administration is using Nazi-Germany designed public humiliation of immigrants to back up anti-immigration policies.

“Almost every American family has an immigration story of its own based on flight from war, poverty, famine, persecution, fear or hopelessness,” Glosser reminds us. “These immigrants became the workers, entrepreneurs, scientists and soldiers of America.”

“No matter what opinion is held about immigration,” he says, “any government that specifically enacts law or policy on that basis must be recognized as a threat to all of us.”