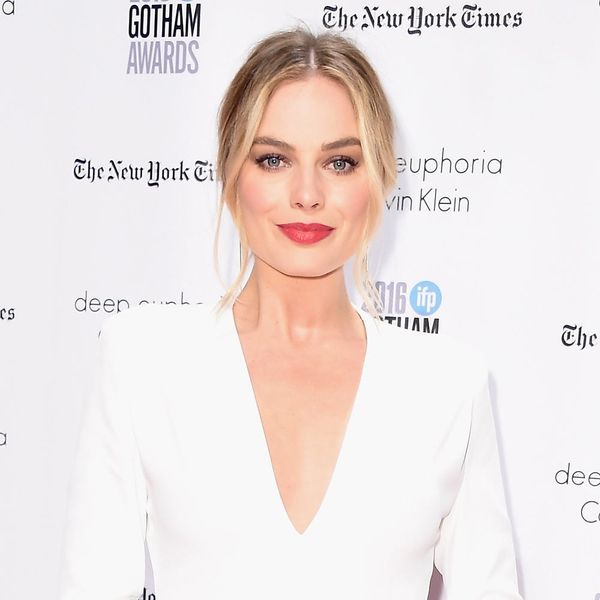 There’s no doubt now that Margot Robbie just pulled off the stealthiest wedding of the year, and though it looked as if the Suicide Squad star was going to keep the deets of her special day with new hubby, Tom Ackerley, completely private, she’s just given us confirmation that she is indeed married. And beyond that, we’ve been given an up-close-and-personal peek at her diamond teardrop dream ring.

After rumors started buzzing hard about 26-year-old Margot’s (now not-so-)secret nuptials with her director hubby, the actress decided to confirm the news herself by giving fans a look at her ring. Though the peek may have been a little too, er, personal.

Flashing the camera her ring-finger in a pose more akin to giving the bird, we can see Margot’s ring, which features a teardrop or pear-shaped diamond sitting in the middle of a band that appears to be covered with smaller stones.

What do you think about Margot’s ring? And the way she showed it off? Tweet us @BritandCo!

Desiree O
Desirée O is a ‘Professional Bohemian’ who loves anything and everything related to the arts, entertainment, and pop culture. She ADORES being a ‘Newsy’ for Brit + Co, covering all of the latest tidbits of awesomeness that you want to read about. When she’s not writing, she’s either making messy art, going on long adventurous walks with her camera, or poking around over at bohemianizm (http://www.bohemianizm.com/). You can find out about Desirée O and her work at http://DesireeO.com/ or follow her on Twitter @DesireeO.
Celebrity Wedding
Celebrity News
Celebrity Wedding Engagement Rings