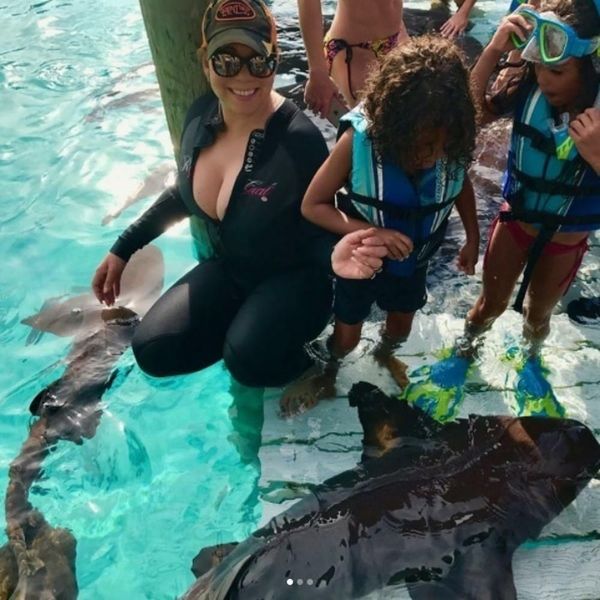 We’re well-aware of the fact that Mariah Carey isn’t a “normal” mom — in fact, she’s a super fab celeb who just happens to have kiddos. She’s the kind of mom that pops on her own classic Christmas song during the holidays and twins with her twins. She’s also the sort of parent who takes her kids swimming with sharks.

While plenty of families spent the July Fourth weekend BBQ-ing and enjoying fireworks, Mariah Carey took her six-year-olds, Monroe and Moroccan, to the ocean. But there was no simple splashing around the shoreline for these little ones. They were there to get up close and personal with Nurse Sharks.

“Shark day with #dembabies … don’t worry, they’re gentle #NurseSharks,” Mariah wrote on Instagram, referring to the fact that Nurse Sharks are pretty darn docile and not considered a threat to humans. Bottom-dwellers that can found in shallow, warm waters, a Nurse Shark’s diet consists mostly of small fish, shrimp, and squid… again, NOT humans.

Carey also posted a video that clearly shows herself and her twins underwater surrounded by the sharks, even reaching out to touch the creatures as they swim by, totally undisturbed by the visitors.

Bryan Tanaka, Carey’s back-up dancer and possibly on-again bae, also shared a video of the fun, showing that he was not only with the famous family, but also enjoying one heck of a fabulous experience.

As we gear up for the always-exciting Shark Week, it looks like Mariah Carey and her duo of little daredevils have already kicked things off for us.

Would you take your kids swimming with sharks or have you already? Let us know @BritandCo!