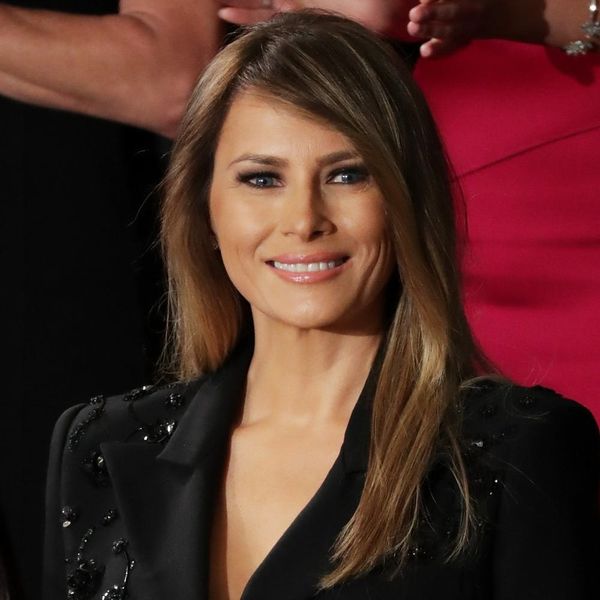 Melania Trump has been keeping a rather low profile since President Trump’s inauguration. She’s opted not to join her husband in the White House, remaining instead at their home in Trump Tower in NYC so their 10-year-old son, Barron, finishes out the school year.

Last night, though, our first lady reappeared in the public eye to attend Trump’s address to a Joint Session of Congress, donning a whopping $10K worth of Michael Kors for the occasion.

According to The Hollywood Reporter, her black dinner jacket ($4,995) and matching skirt ($4,595) were from the brand’s Spring 2017 collection. She wore the skirt-suit exactly as shown on the runway, forgoing a shirt underneath and accessorizing with a wide belt.

As of press time, social media accounts for Michael Kors had yet to share a photo of the big fashion moment or acknowledge FLOTUS wearing the brand, as they did for actresses wearing Kors to the Vanity Fair Oscars party on Sunday.

Several designers — Tom Ford, Sophie Theallet, Marc Jacobs, Derek Lam, Phillip Lim, and Humberto Leon come to mind — have taken a powerful stand against the Trumps, publicly proclaiming that they will dress neither the president nor his wife. Others, such as Tommy Hilfiger, Carolina Herrera, Thom Browne, and Diane von Furstenberg, however, have no problem with outfitting Trump’s wife. Kors himself has not commented on the sitch one way or another.

While it’s entirely possible that Kors, beloved by celebs including Blake Lively and Viola Davis, is simply keeping a low profile about it, it’s also possible that Trump purchased the ensemble off the rack. She’s worn the designer on three occasions now: to meet Japan’s Prime Minister and his wife in a pair of Kors pants with a black blouse and black wool coat, on Election Day with a Michael Kors dress underneath her Balmain coat, and most recently, to the Joint Address.

Do you think Kors is outfitting Melania on the sly? Tweet us @BritandCo!

Channing Hargrove
Channing Hargrove is a freelance fashion editor and writer in New York City. When she isn’t writing about clothing (or shopping, for research, of course), Channing is writing about life in a tiny studio apartment in a big city — and what she’s wearing — on her blog, Channing in the City.
Celebrity Style
Celeb Style
Celebrity Style Politics
More From Celeb Style