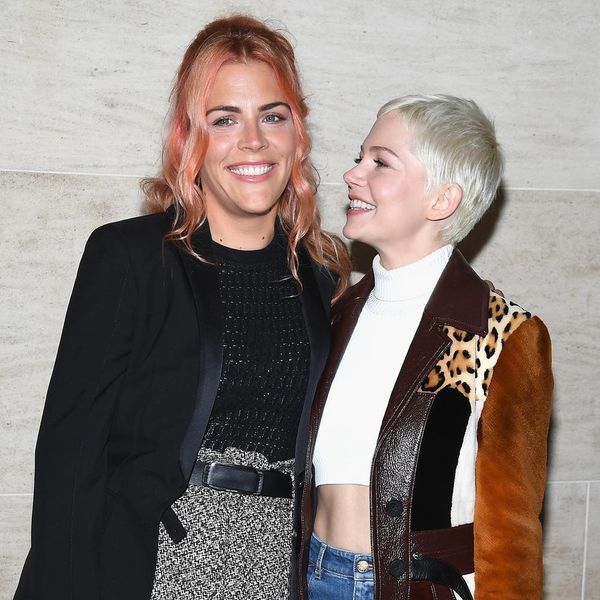 Michelle Williams just proved she’ll trust her longtime BFF Busy Philipps with basically anything, because she let her dye her hair millennial pink while drunk, and the results are amazing.

Just me, in Paris with my twin teenage daughters that I love. ❤️

Williams famously isn’t on social media, but she still pops up from time to time on Philipps’ account for an occasional joint makeup-free selfie or two. But the stylish duo have been hanging out for Paris Fashion Week, and it seems the abundance of French wine and caviar got them feeling a little bit bold, and we love it.

Philipps has been rocking pink hair on and off for several months, and Williams has traditionally stuck to her platinum blonde pixie. That is, until last night, when they got home from a night on the town and decided to dye Williams’ hair the chicest shade of blush we’ve ever seen.

The Manchester by the Sea star was game to have the entire process filmed on her BFF’s Instagram Stories. The tipsy videos are hilarious, and, we’re happy to report, Philipps actually did a great job! It started with the Cougar Town actress showing the little bottle of pink dye she was going to use on her pal’s head.

At first, Williams seemed slightly nervous, even bargaining to have the dye in for only THREE minutes, but then once she realized she was in good hands, she seemed to love it.

The pals dutifully waited for the color to process, while enjoying two large glasses of white wine.

The pair then they chilled in bed as they showed of Williams’ new baby pink tips.

Would you trust your BFF to dye your hair? Tweet us @BritandCo!

Arielle Tschinkel
Arielle Tschinkel is a pop culture junkie who went to NYU because the Olsen twins went to NYU (really). She is a freelance writer whose work has also been featured on HelloGiggles, Refinery29, SheKnows, Bustle, Hollywood.com, and many others; and she's living her dream one Britney Spears GIF at a time. Follow her on Twitter @mrstschinkel or visit her website at arielletschinkel.com.
Celebrity Hair
Hair
Celebrity Hair hair dye