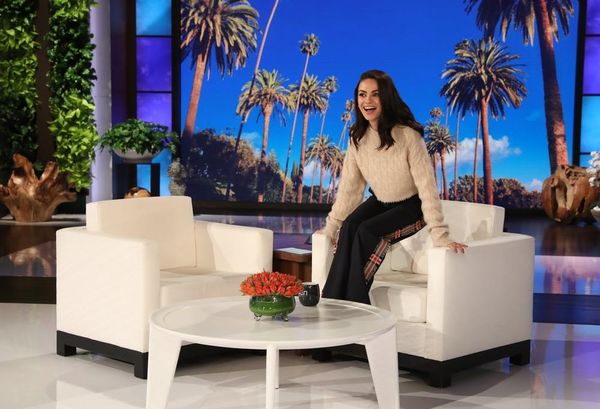 Mila Kunis is a huge fan of the Bachelor franchise. She and husband Ashton Kutcher even appeared on Rachel Lindsay’s season of The Bachelorette in 2017. So she couldn’t help geeking out a little when she interviewed Colton Underwood on Thursday’s episode of The Ellen DeGeneres Show, which she guest-hosted in DeGeneres’ absence.

“This is so fun for me! This is crazy. Can you feel my heart? It’s like, whoo! Man, this is nerve-wracking,” she told Underwood and Bachelor winner Cassie Randolph, who was seated in the audience. “You guys are so cute. You know, I’ve never nerded out on any actor. The only people I’ve ever fanned on are reality people.”

Once she got over her initial excitement, she grilled the couple on all things Bachelor-related, from their secret meet-ups pre-finale to how they feel about the next Bachelorette, Hannah Brown, who was a contestant on Underwood’s season.

“I think it’s gonna be a fantastic season,” Underwood told Kunis. “She is like unapologetically herself, she has no filter. And that makes for good TV and falling in love. I’m very excited.”

Kunis was not convinced, so she looked to Randolph for her opinion, since the women lived together in the Bachelor mansion. Randolph was equally supportive of her formal rival’s search for love, saying, “I’m so excited to watch her, I think she’s gonna do great.”

That was apparently not the answer Kunis was hoping to hear. “Ugh, both of you!” she quipped. “Stop it!”

Brown will officially kick off her journey in May, but she already handed out her first rose back in March. And in another unprecedented move, the show used Facebook to release the names and photos of 33 men who may be competing for her love. The key word there is “may.” We’ll find out for sure when season 15 of The Bachelorette premieres May 13 at 8pm on ABC.

Desiree O
Desirée O is a ‘Professional Bohemian’ who loves anything and everything related to the arts, entertainment, and pop culture. She ADORES being a ‘Newsy’ for Brit + Co, covering all of the latest tidbits of awesomeness that you want to read about. When she’s not writing, she’s either making messy art, going on long adventurous walks with her camera, or poking around over at bohemianizm (http://www.bohemianizm.com/). You can find out about Desirée O and her work at http://DesireeO.com/ or follow her on Twitter @DesireeO.
Celebrities
TV
Celebrities Celebrity The Bachelor TV
More From TV