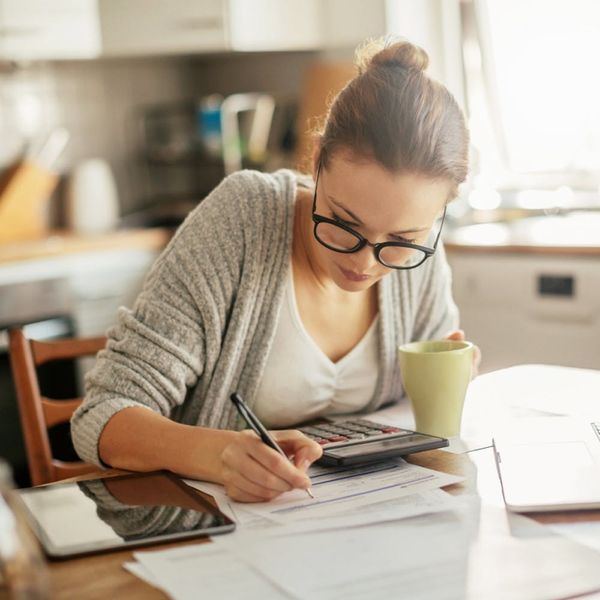 The whole idea of sharing being synonymous with caring shouldn’t be new to you. If you’re anything like us, those conveniently rhyming words have been linked in your mind ever since you heard that all-too-handy saying about them — “sharing is caring!” — used by your kindergarten teacher. Back in those days, sharing probably meant resisting the urge to throw a temper tantrum when a classmate asked to use your favorite crayon, but now that we’re adults (ew), sharing obviously looks a little different, and extends to our ability to be generous with our money. Many millennial women have taken the sharing-is-caring mantra to heart, and there are some unique trends among our generation when it comes to being charitable, according to a new report from Fidelity Charitable.

Compiled based on feedback from more than 3,000 donors, the Women and Giving report is chock full of interesting insights about how women from various generations opt to give back. While some of the differences can be attributed to age more than generation — for example, millennial women haven’t had as much time to build up wealth and reinvest it in meaningful causes than Baby Boomer women — others can definitely be traced to different philosophies and priorities.

We chatted with Fidelity Charitable’s Director of Insights and Thought Leadership Susan Shell (a millennial herself!) to learn more. Keep reading for more details on these millennial trends.

1. Millennial women are focused on the environment and on causes that specifically affect women, girls, and international communities. While Baby Boomers tend to prioritize giving back to disease-fighting organizations and other health-related causes, millennials are putting their money behind groups that are working to prevent damage to the environment and to provide support for groups of people with limited access to resources and opportunities — namely women, girls, and people living in other parts of the world. “Millennials have grown up in a world that is so much more connected than the Boomer generation,” Shell says. “Something that’s happening halfway around the world feels much closer. Millennials live in this interconnected world and that really spills over into their giving.”

2. Millennial women are giving more spontaneously. Women from our mothers’ and grandmothers’ generations have tended to have a clearer strategy around their charitable giving, according to Shell, and while some of that is certainly a factor of age and wisdom, it can also be attributed to the influence of social media. You know the drill: You’re scrolling through Facebook and see that three of your BFFs are participating in races or dodgeball tournaments to benefit a cause that’s meaningful to them. Of course you’re going to pledge a few dollars. Social media and crowdfunding have conditioned millennial women to give on a more ad hoc basis. Generations before us preferred to have one or two causes or organizations that they put most of their charitable dollars behind.

3. Millennial women lead with their heart when it comes to charitable giving. Per the Women and Giving report, three-quarters of millennial women say they follow their heart in choosing how to give back. This is part of the broader trend away from more strategic giving. Millennial ladies are putting their money where their heart is… and you know what? That’s okay!

4. Millennial women make giving social. “The social approach is about giving being much more integrated into millennials’ daily lives,” Shell tells us. “More so than any other generation, millennials are talking about their giving with their peers. With their spouses, they’re using conversations about giving as a way to deepen their relationships. Millennials are more likely to encourage friends to donate to the same causes they’re donating to. They’re more likely to advertise a cause on social media.” Retweet!

5. Millennial women are struggling to see the impact of their donations. The downside to all of this, perhaps, is that millennials aren’t seeing the impact of their giving the way they would like to — which is ironic, since we’re often referred to as “the impact generation.” “Millennials are giving a little bit more in the moment, but they’re also less satisfied with their giving than any other generation,” Shell says. “Even though they’re so emotionally connected to giving, they’re giving to a much broader range of causes than older cohorts. It sort of dilutes their sense of impact.” If this feeling sounds familiar to you, Shell recommends getting a little more strategic about your donations (hey — we have a lot to learn from our moms and grandmothers!). Take time to consider how much you can budget over the course of the year for giving back, then set aside 60 to 70 percent of that amount for causes that you know will make you feel impactful. The remaining 30 to 40 percent can support more spontaneous giving.

Do you have a favorite cause to give to? Tweet us @BritandCo!

Alli Hoff Kosik
Alli Hoff Kosik is a freelance writer who is passionate about reading, running, rainbow sprinkles, her lipstick collection, watching embarrassing reality TV, and drinking pink wine. She lives in Brooklyn with her husband and (in her dreams, at least) three golden retriever puppies. Listen to her talk books on The SSR Podcast.
Charity
Adulting
Charity study