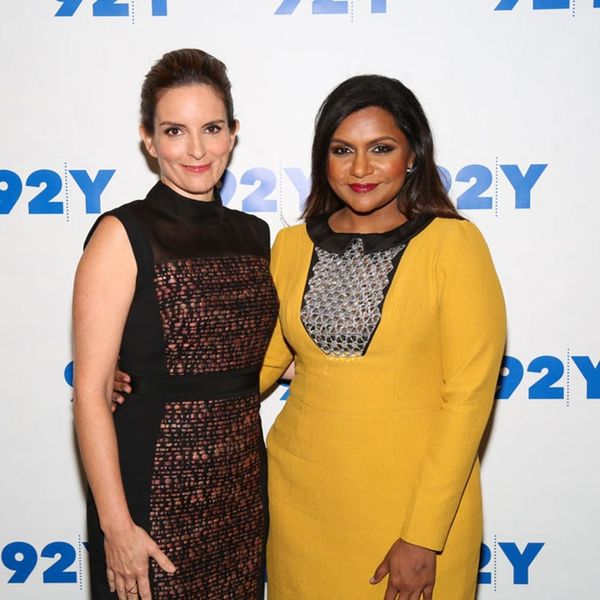 We didn’t think we could love Mindy Kaling any more than we already do, but then she hosted a chat with Tina Fey at the 92Y in Manhattan to talk about her new book, Why Not Me?, and basically our minds imploded. These gals were both dressed to the nines (Tina actually said she had to step it up because she knew Mindy would be “bringing it”). We have to say, Tina was not wrong. Clad in a Salvador Perez original, Mindy was stunning in bold marigold and red lips.

Mindy kicked off the talk with a special intro about how she starred on The Office in her 20s and now has her own show in her late 20s (Hey, if she says so, then it must be right ;). Fey jumped right in with the hard hitting questions like, “Why a second book, Mindy? Aren’t you rich?” They touched on everything from kissing scenes (Mindy loves ’em, Tina hates ’em) to boyfriends and being the boss.

The film industry has been under fire this year as more reports on the gender wage gap within it go public. What is consistently true as well, is that diversity on camera and behind the scenes is STILL not what it needs to be. So when Mindy revealed that she had a romcom in mind, we were ready to get tix for the midnight screening. The multi hyphenate spilled that she once pitched a romcom starring Tina opposite… GEORGE CLOONEY. Mindy explained that the film would take place at a university and Clooney would be this “Indiana Jones-type professor.” Tina would play the librarian who finds him obnoxious and irresistible. They’d go on an adventure together and end up “banging in Rome.” Fey suggested that’s what they call the film, and we think this has Valentine’s Day-weekend hit written all over it.

On a more serious note, Mindy said she would love to write and direct a romantic comedy someday. She has directed a few episodes of The Office, but she hasn’t found time to direct The Mindy Project since she is busy writing it and being the showrunner. While we’re dying for a Mindy-penned romcom, we’ll settle for watching The Mindy Project (on Hulu now!) and reading her new book.

Who is your dream romcom matchup? Tell us in the comments below!

Meredith Lepore
Meredith is a freelance writer/editor who writes for Levo League, Bustle, Refinery 29, Instyle.com as well as magazines including Marie Claire, SELF, Women's Health and Cosmopolitan. Before going freelance she was Editor in Chief of the women's career site The Grindstone. She earned her Masters in Magazine, Newspaper and Online Journalism from the Newhouse School at Syracuse University. Meredith resides in New York full time and enjoys SoulCycle, jogging and playing with her Yorkshire Terrier Otis, who also loves SoulCycle.
Home News