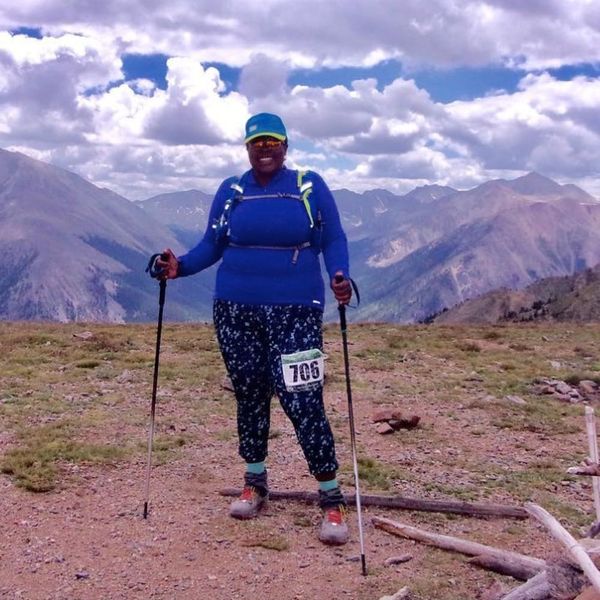 When we chatted with the popular running blogger and newly minted author Mirna Valerio, she’d just finished running a half marathon.

“I came in last,” she told us over the phone, “but it doesn’t matter.” Her attitude is unlike that of many runners, who might run to challenge their last race time or to win. But Valerio is not running to prove anything to anyone except for one thing: that plus-size runners like herself can and do exist.

Valerio is the author of the brand-new, body-positive memoir A Beautiful Work in Progress, which expands on the themes of her popular running blog, Fat Girl Running. The Georgia-based Spanish teacher, choral director, and cross-country coach has been a serious runner for 25 years, but it wasn’t until she began training for her first full marathon in 2011 that she decided to start a blog to document her experience.

A little #wonderwoman pose to fortify myself before the last day of recording my #audiobook! This #sunrise was gorgeous and I just had to go on a #run to see it up close! • • • • #empoweredbyrunning #running #womensfitness #getoutstayout #getoutdoors #chaseadventure #realwomenmove #swiftwick #merrelloutside #skirtsports #nycustompt #fatgirlrunning #curvyfit #author #authorsofinstagram #writer #writersofinstagram #runnersofinstagram

Valerio quickly drew attention as a visibly plus-size woman sharing her story in the world of endurance running. She never expected her fan base to grow as quickly as it did or for people to take inspiration or guidance from it, but she grew to embrace her role as an ambassador for diverse bodies in sports.

“My job is to make people feel uncomfortable and to challenge their own stereotypes and their preconceived notions about who is allowed to run,” Valerio tells us.

As Valerio reminds us, the word “fat” is generally considered to be an insult. “Fat people traditionally are thought to be lazy, to be indolent, to be slovenly, unambitious,” she says. She feels it’s important to show the running world that all bodies are allowed to be fearless, and has made it her mission to prove that bodies of all shapes and sizes can be active and do what they love.

She also wants society to examine its rigid notions of why people might exercise in the first place. Not everyone is exercising because they want to lose weight, she points out. Some people run simply because they love it. She hopes between her blog and her memoir, she’s helping to change the dialogue and narrative on fat bodies in motion.

Yep folks!!! It's official! I'm on the cover of @womensrunningmagazine for the September issue and I'm so psyched, honored, and humbled. I've taken over the #womensrunning IG for the day so head over there to check out my Instagram Story!

In A Beautiful Work in Progress, Valerio goes deeper into her journey from being a first-time racer to the endurance runner she is today. “I wanted this book to be a celebration of running and my own body,” she tells us. “I want it to be inspirational and motivational for people who want to get out there and try really hard shit. I want people not to be afraid to go out and try stuff, even if there is the possibility of failure.”

Valerio knows that for some people, breaking down that mental barrier can be hard to do. She suggests to take it slowly: Just put on a pair of athletic shoes and begin with a walk.

“Make this journey yours,” she says. “Make it work for you.”

Amanda Scriver
Amanda Scriver is a passionate storyteller and body image advocate based out of Toronto, Canada. When she isn't writing for various publications, she finds time to Keep Up With The Kardashians while partaking in life's greatest pleasure: the chip buffet. Don't ask her what her favorite restaurant is, it's complicated
Body Positive
Body Positivity
Body Positive Every Body inclusivity Plus Size