10 Things Kim Kardashian Told Us About Hillary Clinton, Women in the Media + More 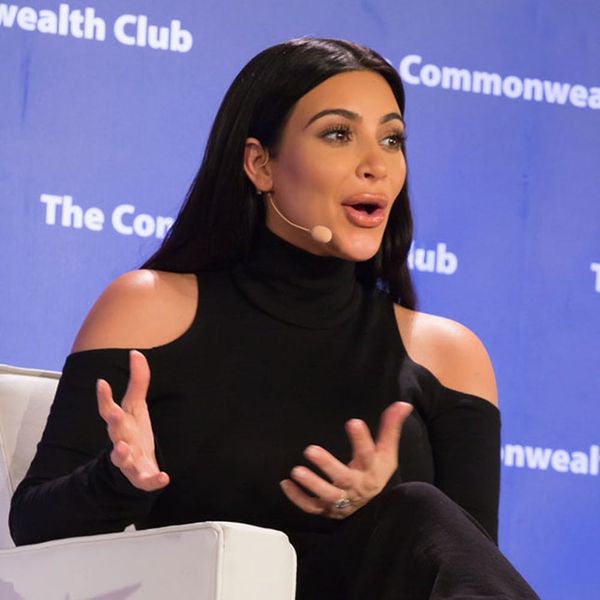 When we heard that Kim Kardashian West would be gracing San Francisco with her presence and wisdom at INFORUM, The Commonwealth Club’s Innovation Lab, we could barely contain our excitement. As avid Kim KW experts and Kim Kardashian: Hollywood addicts (#tragicallystillonthedlist), we were thrilled to see Kim in conversation with LaDoris Cordell, former Superior Court judge and outgoing San Jose Independent Police Auditor, and over the course of the hour-long discussion, Kim said some things you’d never expect the reality star and mother of almost two to say.

The interview touched on everything from her best selfie tips (spoiler alert: it’s all about the lighting) to her advice for young women and her pick for the next president (Kim is Team Hillary all the way). As one of the most followed people in the media —she has a whopping 94 million followers across her social media accounts — there’s no denying that Kim is at this point in her career a powerful business woman and global tastemaker. Scroll on for ten of the best #Girlboss tips we learned straight from Kim.

1. You’re never too young to hustle. Kim opened the conversation with a story about one of her first hustling gigs, back when she used to sell and resell fashion items on eBay. She recounted one of her best sales, when she spotted Manolo Blahnik heels in a brand new JLo video and immediately called the store to buy all of their inventory. While her dad fronted the money, he made her sign a contract that she’d pay him back in full, plus interest. She ended up making a serious profit by reselling the shoes, which taught her the importance of following your instincts. “My love for selling and hustling really started young.”

2. Success comes from being open and honest. While many would find it difficult to pinpoint exactly what makes Kim KW so famous, she says, “My career is based on openness and honesty. I love having relationships with people on social media.” Whether she’s flying to a fan’s birthday party in another city or responding to a fan’s DMs on Instagram, Kim prioritizes her fans and their access to her life.

3. Don’t discount college. Neither Kim nor Kanye took the traditional route to college, but Kim says she will still encourage her daughter to go to college if she really wants to, noting that it really benefited her sister, Kourtney.

4. Find your passion and your work ethic. When giving career advice for young women, Kim expressed that passion and good looks aren’t enough to ensure a successful career. She said, “I encourage people to find their passion and really be determined and have drive.” Modeling gigs, acting gigs and everything in between require ambition and skill, “People sometimes think that with looks, things will come easy… I really just encourage people to put in the work.”

5. Know your strengths. Kim chalks up much of her success with her insanely popular game app, Kim Kardashian: Hollywood, to her strong partnership with Glu Mobile Inc, noting, “In business, it’s important to know what you’re good at and stick with that and let the team that you’re working with do what they’re good at.” For Kim, that meant leaving the coding and logistics of the game to Glu, while still maintaining creative control over the game’s aesthetic.

6. Don’t let people put you in a box: Kim noted that one of the frequent challenges women face in business and the media is being boxed in by the public’s assumptions. She’s quick to admit that on Keeping up With the Kardashians, she’s showing a silly, more intimate side to her personality, but she emphasizes that there is more to her than gets captured by the reality show cameras. “I think it’s harder when people just want to put you in a certain box, or a certain way, [like] just because I post so many selfies, I can’t be good at some other business venture.”

7. Flip the narrative on objectification: Kim agreed that the media frequently objectifies women, but she said that the conversation doesn’t have to stop there. “I think you can take that power and put out there what you want people to look at, what you feel is beautiful and what you want to portray about yourself.” For Kim, maintaining control of her image is her method of rising above the media’s objectification, especially in her new book, Selfish ($12). “I think the selfies objectify me. I don’t think it’s a bad thing. I’ve taken them, I’ve chosen to put them in there, I’m proud of them. I think there’s power in that. I think I have the control to put out what I want. I feel proud of that and good about that. Even if it’s objectifying myself, I’m okay with that.”

8. Be confident. After years of being insecure about her body, Kim says that the best self-image advice she has for women is to, “be confident and secure in who you are… Everyone is different. You should just try and be proud of who you are.”

9. Be compassionate: Kim touched on Caitlyn Jenner’s transformation and emphasized that compassion is important, “Everyone has their own struggles, and you’ll never know what they are.” While some might question her family’s decision to film the experience, she told the crowd, “The reason we wanted to share our family story on our show — we did a two-hour special — was to show that every family member will have a different opinion and reaction, and that’s okay.”

10. Support women: While Kim says many people would call her a feminist, she said, “I don’t really like to put labels on things.” Instead, Kim says she does, “what makes me feel comfortable, and I never say what I’m doing is the right thing… I encourage women, I love supporting women, in business and in life.” That sounds pretty feminist to us!

What are your thoughts on Kim’s #Girlboss tips? Tell us in the comments below!

Angela Velez
Angela is an MFA Fiction candidate at the University of Pittsburgh. You can find her reading obsessively, wandering bookstores and watching melodramatic television.
Feminism
Work
Feminism Girlboss Kardashians