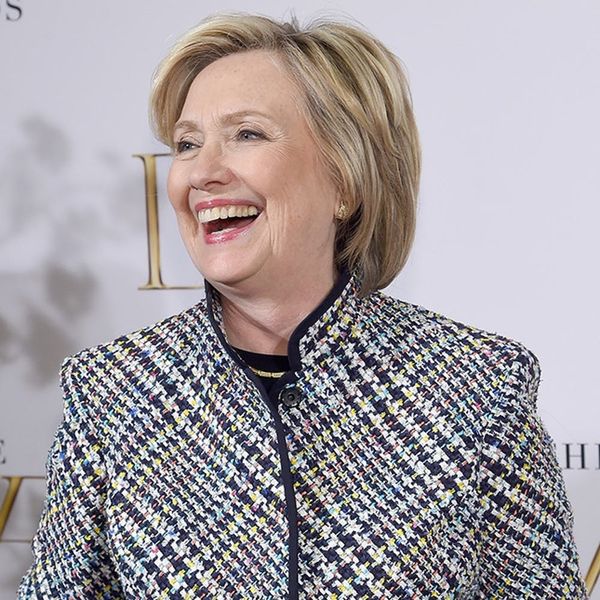 The race for the White House has been heating up ferociously already this year, even though the election isn’t until next November. To capitalize attention — and remain in the news cycle — Hillary Clinton is doing anything and everything she can to be at the top of the presidential hopefuls hill. She recently debuted a punny “Everyday Pantsuit Tee” and the “Yaaas, Hillary!” shirt to capture followers and non-followers attention. But her most recent tactic involves social media. Instagram to be exact.

Hillary Clinton joins recent famous Instagrammers Ryan Reynolds + Betty White on the photo-filled social media outlet to capture the attention of the Internet even more. The “doting grandmother, among other things,” as her profile describes, has only published one photo at the moment. Again, poking fun at herself — is she taking lessons from Olivia Pope?! — a shot of red, white and blue pant suits are hanging for her to wear with the caption “hard choices,” accompanying it. While funny, that is definitely the least of the hard choices ahead of her.

Our ever-scrolling fingers are crossed Hillary posts snaps of little granddaughter Charlotte and even some “Humans of New York”-inspired shots of people’s stories she meets along her campaign in addition to all those hardy-har self-deprecating ones. We’re watching, Hil ;)

Will you be double tapping Hillary Clinton’s photos on Instagram? Let us know in the comments, and make sure to follow us @britandco.