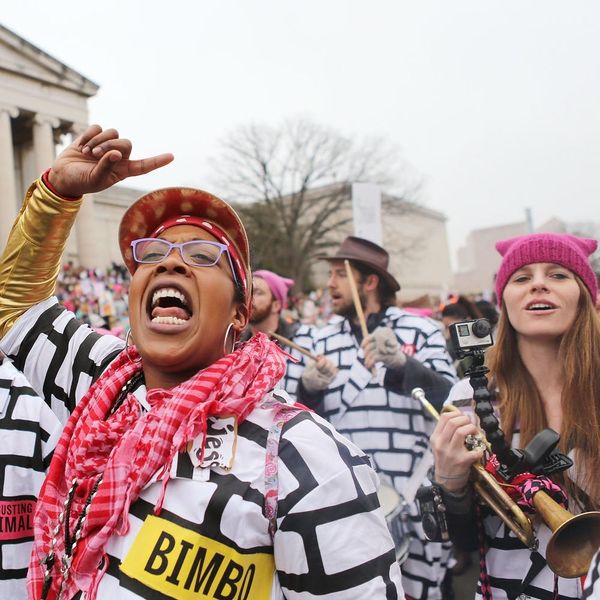 It’s only day two of Trump’s presidency, and already, we’ve seen a LOT of changes. While adapting has been tough for some, others are coming together to fight for what they believe in — including your favorite celebrities. History is being made with the Women’s March (watch here!), and we are so proud of this display of love and acceptance being shown toward our fellow humans. According to CNN, more people are on the National Mall today for the Women’s March than there were yesterday for the inauguration, making it, quite possibly, the largest in inaugural protest HISTORY, with an estimated 500,000 people in DC alone. Wowza!

While final tallies have yet to come in, the proof is in the photos: Where trains were empty yesterday, they overflowed today, giving us flashbacks to those we saw for former POTUS Obama’s first inauguration in ’09. Just look at this:

A police officer told me this is like Obama in 2009. Unreal. Capitol South metro. #WomensMarch pic.twitter.com/sAAlOY1kEZ

Here’s a photo from inside the metro situation yesterday…

Deserted metro on #Inauguration morning. This is not what it looked like in 2008 & 2012. pic.twitter.com/Yaf6sjgwMV

…which is literally nothing compared to what was outside the station this morning.

From a friend, this is the Shady Grove Metro station. She's already been waiting 40 minutes. #WomensMarch pic.twitter.com/ZH9bV0D7jW

Look at all those pussyhats! What a way to make a statement.

No word yet on what President Trump thinks of these developments, but if the goal was to send a message, we’d say that the goal was 1,000 percent achieved.

Are you attending the Women’s March? Show us your pics @BritandCo!

Shea Lignitz
Shea can be found in the nearest bookstore or brewery, exploring the great outdoors, or blasting Led Zeppelin. She grew up in the cold and rain of Northern California's redwoods but is currently wandering around Texas.
Politics
Politics
Politics
More From Politics