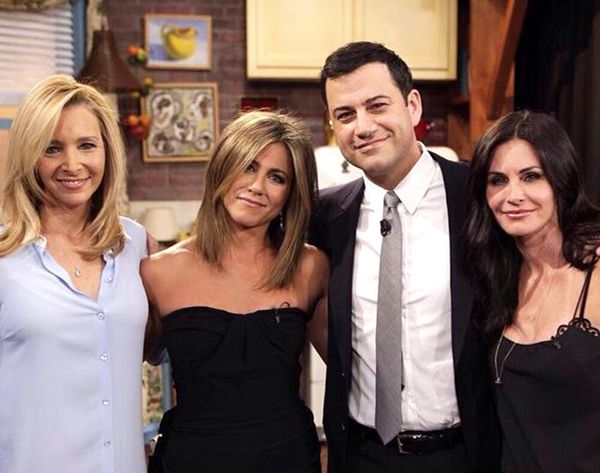 A lot went down in 2014. But some of our favorite moments were less about living in the now and more about celebrating our favorite decade of nostalgia — the ’90s (teens of the aughts, please rise). From reunions to scrunchie hair, get the 4-1-1 on our faves below, STAT!

1. Iggy Azalea, Fancy: We were totally buggin’ when we saw Iggy channeling Cher Horowitz in her chart-topping video. You think she’s a virgin who can’t drive?

2. Friends Reunion: The ladies of Friends reunited for a skit on Jimmy Kimmel Live! and it took us back to when we were dying for the Rachel and endless mugs of coffee at Central Perk.

3. We Met Bill Nye: Brit met Bill Nye THE Science Guy at the White House Maker Faire and it was out of this world.

4. #TBT Halloween: Two things we’re all about at Brit + Co: Halloween and nostalgia. So we obviously trick or treated with some hella cool ’90s-inspired costumes this year.

5. ’90s Hair Came Back: We went a little crazy with the scrunchie and chalk hair looks this year. But whatever, we think they’re all that and a bag of chips.

7. Scrunchie Style: Not only did we crimp and scrunch our hair this year, we also played a huge April Fools joke on our readers when we transformed the entire site ’90s-style. How many of you thought we were totally buggin’ when you saw scrunchie tutorials and printable pogs taking over Brit.co!?

9. Miley Brought Rainbow Loom Back: Miley took a cue from T.Swift and started repping her birth year (that’s ’92 for Miss Cyrus) by tackling the decade’s best art projects throughout the year. Like rainbow loom! She’s just being Miley, y’all.

11. dELiA*s Closed: Our fave clothing catalog (and store) is outie. Excuse us while we search the Internet for comparable looks.

12. Alfonso Ribeiro Won Dancing With the Stars: Yes, that’s Carlton from Fresh Prince of Bel Air and yes, he danced the Carlton (and won) this year’s fall season.

13. Trapper Keepers 2.0: Although our world is more digital today, we love a good nostalgic office supply. Pick up one of these tablet covers and reminisce about the days of gel pen love letters.

14. Nicki Minaj Brought Back Back: The year was all about booty. A big contributor of 2014’s baby got back movement was the raptress herself.

15. ’90s Grunge: Thanks (primarily) to Queen Bey, the grunge look has officially made its way back into our closet. We’re not mad, we think it’s totally fly.

16. Girl Meets World Debuted: We KNEW Cory and Topanga would end up together and have the cutest family.

17. Cereal Cafe: This London cereal haven opened its doors this year and our favorite breakfast food has never been the same. Get us a ticket to Londontown STAT.

18. We DIYed like It Was the ’90s: From safety pin necklaces to ’90s heartthrob Valentines, our DIY projects were all that (No duh!).

19. Clip Art Ends: Now that emoji have taken over our lives, Microsoft told us Clip Art is no longer. Uncool.

20. Toy Story 4 Was Announced: We have mixed feelings about the announcement of another Buzz and Woody adventure (Toy Story 3 ended so perfectly). But, no duh, we’ll be at the premiere to watch all our favorite toys one more time when the film is released in 2017.

21. Clueless Reunion: Cher, Dionne and Amber together again?! Is this like a Noxzema commercial or what?

22. The Nostalgia Machine Brought Us Back: Enter a ’90s year of music you want to jam to then kick it. Word.

23. Nick + Knight Gave Us New Posters to Put Up: Not only did these two boy banders head out on tour this year, they also recreated some of their (cheesy) iconic photoshoots. We think the fangirl inside of us needs to take a chill pill!

24. Reading Rainbow Killed It On Kickstarter: Take a look, it’s on Kickstarter. Yes, Levar Burton made a comeback this year with his relaunch of the classic literary series for an even BETTER cause.

25. The Boy Is Mine 2.0: Jessie J and Ariana Grande announced they will be remaking Brandy and Monica’s classic The Boy is Mine for the song’s 20-year anniversary. Talk to the hand because we’re a little skeptical.

26. The Goosebumps Movie: Prep yourself again for the scariest monsters — it was announced this year our favorite horror books from the ’90s are coming to the big screen in 2015 thanks to Jack Black.

27. S Club 7 Reunited: There really ain’t no party like an S Club party, so we were hella psyched when they reunited for a medley performance this year. They also announced they’re heading out on tour next year, giving 2015 some pre-emptive ’90s chops.

28. Dumb And Dumber To Made Us Laugh: The dumb duo reunited for a sequel 20 years after the original. Mock! Yeah!

29. French Toast Crunch Returned to a Cereal Aisle Near You: Naturally we are freaking out over the return of our fave syrup-heavy cereal.

30. Surge Made a Comeback: The minute we heard Surge was available on Amazon, we bought a crate. And if you think we’re clownin’, talk to the hand.

31. The Unauthorized Saved by the Bell Story Got Detention: The Lifetime TV movie may have been a total hot mess, but it still got us SO EXCITED to see the gang kinda together again.

What ’90s moment this year left you in need of a chill pill? Let us know in the comments.