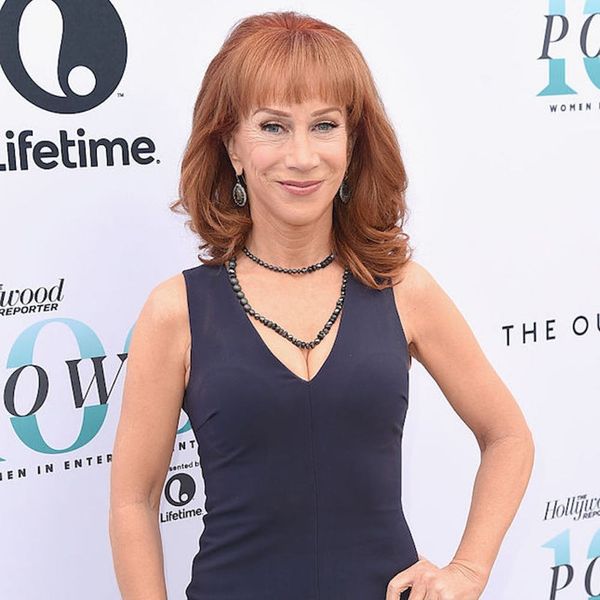 Kathy Griffin’s controversy and Donald Trump’s “covfefe” lead this morning’s top news stories. Check those and more out below in the Wednesday Morning Buzz.

I am sorry. I went too far. I was wrong. pic.twitter.com/LBKvqf9xFB

1. Kathy Griffin caused major outrage on the internet yesterday after a disturbing photo showing her holding President Trump’s bloody, decapitated head circulated on social media, drawing criticism from conservatives and liberals equally. “I went way too far,” comedian Griffin said in a video apology on Twitter shortly after the controversy spread. “It wasn’t funny. I get it. I’ve made a lot of mistakes in my career, I will continue. I ask your forgiveness. Taking down the image. I’m going to ask the photographer to take down the image and I beg for your forgiveness.” President Trump has said Griffin should be ashamed of herself, and Chelsea Clinton has tweeted her disapproval as well, calling the photo “vile and wrong.”

Who can figure out the true meaning of "covfefe" ??? Enjoy!

2. Donald Trump accidentally tweeted a non-existent word and people immediately turned it into a meme because of course. At around midnight Washington, DC time, President Trump sent out an incomplete tweet that read, “Despite the constant negative press covfefe,” and people were immediately confused. The tweet wasn’t deleted right away, so people started joking that he meant to write “covfefe.” Some started speculating what it could possibly mean. The beloved Obama and Biden memes even made a return. Trump finally deleted the tweet, seemingly when he woke up, and left it up to the people to decide what it meant. Time for that morning covfefe.

3. Olivia Newton-John has revealed that she’s battling breast cancer that has spread to her back. Newton-John postponed the start of her concert tour recently because of severe back pain, which she has now discovered was being caused by metastasized cancer. She has now postponed her concert dates through June as she undergoes treatment. Sending all our best her way for good health. (h/t Facebook; photo via Robert Cianflone/Getty)

4. Vanessa Hudgens is the newest judge on So You Think You Can Dance. Hudgens will join regulars Mary Murphy and Nigel Lythgoe on the panel for the upcoming season, and Lythgoe says Hudgens is a natural fit. “There was instant chemistry in the audition rounds, and I know the SYTYCD fans will love her as much as we do,” he said in a statement. “Vanessa is an accomplished artist and brings her own brand of enthusiasm and energy to our panel.” SYTYCD season 14 starts June 12 on Fox. (h/t EW; photo via Gustavo Caballero/Getty)

Rihanna fans did not like my blog calling her fat and now I'm being cyberbullied 😩 pic.twitter.com/iuvYIwW8gr

5. Blog bro who fat-shamed Rihanna is now crying about being cyber-bullied. A recent post on a bro sports blog posted a paparazzi photo of Rihanna and proceeded to speculate on if her body has changed shape and if that means it’s going to spark a “fat” trend — a trend that the writer seems concerned about. First of all, nope. Nope nope nope. And second of all, while his Twitter crying about being cyber bullied is surely sarcastic, we hope Rhi herself finds and finishes this guy.

6. Quote of the day: “A young 20s boyfriend is called a disaster of a boyfriend.” Keri Russell reunited with her Felicity costar Scott Speedman on Jimmy Kimmel and dished this bit of (hilarious) advice to her younger TV self.

What relationship advice would you give your younger self? Let us know @BritandCo!