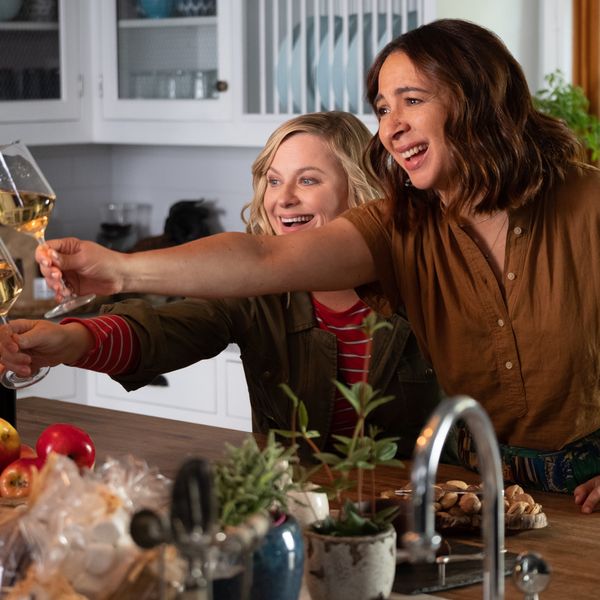 Captain Marvel isn't the only girl-power film taking over theaters and making an impression on moviegoers in 2019: Women are moving to the forefront like never before, not just in front of the camera, but behind it, too. Several of the year's most anticipated releases — from comedies to dramas, animated features to indie hits-in-the-making — are both by and about women. Click through to see some of the female-led films we can't wait to watch. (Photos via Francois Duhamel/Annapurna Pictures + Emily Aragones/Amazon Studios + Eli Joshua Adé/Universal Pictures + Alison Cohen Rosa/Warner Bros. Pictures)

Unicorn Store (April 5): Brie Larson makes her directorial debut with Netflix's whimsical, quirky Unicorn Store. In it, Larson stars as an art-school failure who, after moving back in with her parents and taking a soul-sucking temp job, is offered a chance to live out her childhood fantasy and adopt a unicorn. If it's half as heartwarming as the trailer, it'll be another project in a banner year for the Captain Marvel star. (Photo via Netflix)

Little (April 12): Issa Rae, Regina Hall, and Black-ish actress Marsai Martin star in what looks to be an instant-classic body-swap comedy, in which Hall wakes up one morning to discover she's back to her 13-year-old self and at the mercy of her overworked assistant, Rae's April. Martin, only 14, brought the idea for the film to Black-ish creator Kenya Barris when she was just 10 years old, and her producer credit on the film makes her the youngest person in history to hold the title on a major Hollywood film. Tina Gordon directed and co-wrote the film with Tracy Oliver, who penned the screenplay for the blockbuster hit Girls Trip with Barris. (Photo via Eli Joshua Adé/Universal Pictures)

The Sun Is Also a Star (May 17): Based on author Nicola Yoon's YA novel of the same name, The Sun Is Also a Star stars Grown-ish actress Yara Shahidi and Riverdale's Charles Melton as Natasha and Daniel, respectively, two teens who fall for each other over the course of one day in New York City. The film was directed by Ry Russo-Young, who has more than proved her teen-drama credentials with titles like 2017's Before I Fall and episodes of Everything Sucks! and Sweetbitter. (Photo via Atsushi Nishijima/Warner Bros. Pictures)

Wine Country (May 19): This movie sounds almost too good to be true. It was inspired by SNL alum Rachel Dratch's real-life 50th birthday party, for which she, Amy Poehler, Maya Rudolph, Ana Gasteyer, Tina Fey, Paula Pell, and Emily Spivey went to Napa. Poehler directed the film, with a screenplay by Spivey and Liz Cackowski, and a cast including the OG birthday crew, plus Pen15 star Maya Erskine and actor Jason Schwartzman. Yes. Please. (Photo via Colleen Hayes/Netflix)

Booksmart (May 24): This coming-of-age female buddy comedy marks Olivia Wilde's feature film directorial debut. Kaitlyn Dever (Beautiful Boy) and Beanie Feldstein (Lady Bird) play two over-achieving best friends who decide on their final day of high school to make up for years of studying hard by finally partying hard. Some are calling it a female version of Superbad, which we're here for on every level. (Photo via Francois Duhamel/Annapurna Pictures)

Late Night (June 7): Mindy Kaling continues to dominate Hollywood with a starring role alongside Emma Thompson in Late Night, which is also her first theatrical screenplay credit. Thompson plays an iconic late-night host who's on the verge of losing her show when she hires Kaling's Molly Patel in the hopes of revitalizing her reputation. The script seems as whip-smart as everything else Kaling's done to date, and we can't wait to see it. (Photo via Emily Aragones/Amazon Studios)

The Kitchen (August 9): Not unlike 2018's Widows, The Kitchen centers around three women — played by Melissa McCarthy, Tiffany Haddish, and Elisabeth Moss — who take over their husbands' 1970s NYC mobster duties after the men are arrested by the FBI. The feature was written by Andrea Berloff (Straight Outta Compton), who also marks her directorial debut with the drama. (Photo via Alison Cohen Rosa/Warner Bros. Pictures)

Charlie's Angels (November 1): The criminally underrated Elizabeth Banks is taking on the Charlie's Angels reboot as director, co-writer, and costar. And with Kristen Stewart, Naomi Scott (Princess Jasmine in Disney's live-action Aladdin), and Ella Balinska (Midsomer Murders) set to star as the titular Angels, we know we're in for a treat. Oh, and did we mention that Noah Centineo is set to appear? (Photo via Todd Williamson/Getty Images for Lionsgate)

The Rhythm Section (November 22): After several delays (including a few due to star Blake Lively's on-set hand injury), The Rhythm Section is finally set to arrive in theaters in November. The Age of Adaline star plays a woman going undercover to search for the truth about the death of her family, so expect a lot of different looks and disguises. Reed Morano, who handled several episodes of The Handmaid's Tale, directs. (Photo via Gotham/GC Images)

Frozen II (November 22): The long-awaited sequel has teased a darker, more ominous story for our heroines than the first time around, but its stars — Idina Menzel as Elsa and Kristen Bell as Anna — as well as director/writer Jennifer Lee are up to the task. (Photo via Walt DIsney Studios)

Queen & Slim (November 27): Lena Waithe has emerged as one of Hollywood's most important voices in recent years, and her screenplay for Queen & Slim makes it clear why. The film tells the story of a Black man and a Black woman who are pulled over on their first date, end up killing the police officer in self defense, and subsequently attempt to flee the law. Melina Matsoukas, who has directed culture-shifting videos for Beyoncé, directs. Production is still ongoing, but this is already one of the buzziest movies of the year. (Photo via Emma McIntyre/Getty Images for MTV)

Little Women (December 25): The latest remake of this beloved classic is in the capable hands of Lady Bird writer/director Greta Gerwig, with a cast including Saoirse Ronan, Emma Watson, Laura Dern, Meryl Streep, and many more. Gerwig's iteration is said to focus more on the March sisters' young adult lives and will open on Christmas day. (Photo via Christopher Polk/Getty Images for The Critics' Choice Awards)

Always Be My Maybe (TBA): Netflix hopes to continue its streak with another upcoming original comedy starring Ali Wong and Fresh Off the Boat's Randall Park as childhood friends navigating very different lives when they fall in love as adults. Wong and Park also co-wrote the film, and Nahnatchka Khan, who kickstarted her career as a writer on Malcolm In the Middle, will make her directorial debut on the project, which currently has no set release date. (Photo via Rachel Murray/Getty Images for Netflix)

Troop Zero (TBA): Female directing duo Bert and Bertie — AKA The Berts — take on a screenplay by Beasts of the Southern Wild co-writer Lucy Alibar about a misfit girl (Mckenna Grace) who forms her own scout troop after being rejected by the coveted Birdie Scouts. Troop Zero will arrive on Amazon sometime in 2019 but already received glowing praise at Sundance. Viola Davis and Alison Janney also star. (Photo via Curtis Bonds Baker/Amazon Studios)