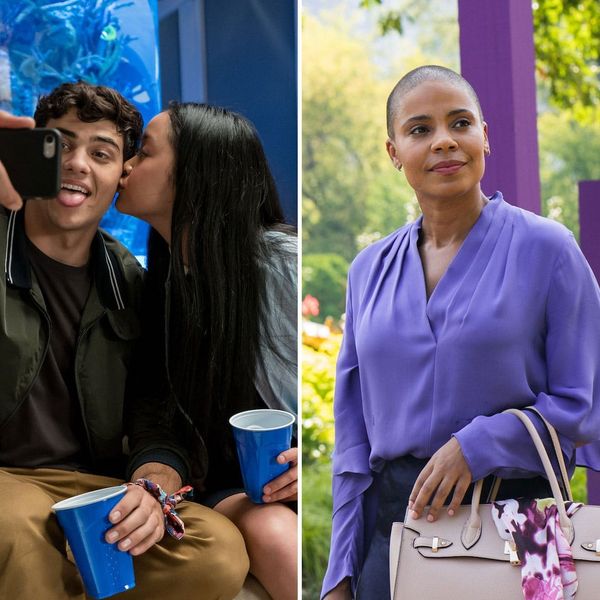 Netflix's ever-growing slate of original content offers a lot of diverse perspectives and stories, both in front of and behind the camera. Several of the streaming service's top original films in recent years were directed by women, including Ava DuVernay, who helmed the documentary 13th, and Susan Johnson, who melted hearts everywhere with To All the Boys I've Loved Before. Click through to see some of the many female-directed Netflix original movies available now. (Photos via Netflix)

13th (Ava DuVernay): This Oscar-nominated documentary is named for the 13th amendment to the United States Constitution, which abolished slavery in the 1860s, "except as a punishment for crime." That exception is the jumping-off point for Ava DuVernay's film, which delves into the history of racial inequality in the US, linking the current criminal justice system to slavery and involuntary servitude. (Photo via Netflix)

First They Killed My Father (Angelina Jolie): Based on Cambodian human rights activist Loung Ung's memoir, this biographical drama tells the story of Ung's life as a young child under the deadly rule of the Khmer Rouge in the mid-to-late 1970s. Angelina Jolie, whose son Maddox is from Cambodia, co-wrote the film with Ung. (Photo via Netflix)

To All the Boys I've Loved Before (Susan Johnson): Lana Condor and Noah Centineo are the rom-com couple of our dreams in this perfect adaptation of Jenny Han's YA novel of the same name. Condor plays Lara Jean Covey, who enters into a fake relationship with Peter Kavinsky (Centineo, swoon) after the secret love letters she wrote to her crushes make their way to their (un)intended recipients. If you liked this, check out Susan Johnson's other rom-com, Carrie Pilby. (Photo via Masha Weisberg/Netflix)

Set It Up (Claire Scanlon): Set It Up, another gem of a rom-com, stars Zoey Deutch and Glen Powell as two overworked assistants who dream up a scheme to set up their demanding bosses (Lucy Liu and Taye Diggs). As you can probably guess, though, the real love story is theirs. (Photo via KC Baily/Netflix)

Tallulah (Sian Heder): Sian Heder, who has written and directed for Netflix's GLOW and Orange Is the New Black, earned praise for this drama about a young drifter named Tallulah (Elliot Page), who kidnaps a baby from a mom she believes to be neglectful. In need of help, she seeks out her ex-boyfriend's mother Margo (Allison Janney) and claims the child is Margo's granddaughter. (Photo via David Newsom/Netflix)

Deidra & Laney Rob a Train (Sydney Freeland): Under the direction of Sydney Freeland, Ashleigh Murray and Rachel Crow play the titular Deidra and Laney, two sisters who decide to, well, rob trains to help their family stay afloat when their mom is sent to jail for a minor offense. (Photo via Netflix)

What Happened, Miss Simone? (Liz Garbus): Liz Garbus earned a Primetime Emmy nomination in the Outstanding Directing for Nonfiction Programming category for this documentary feature about legendary singer Nina Simone. The film was also nominated for Best Documentary Feature at the 2016 Oscars. (Photo via Netflix)

Nappily Ever After (Haifaa Al-Mansour): Sanaa Lathan stars as a woman who embarks on a journey of self-discovery and independence after her perfect life unravels in a series of disappointments involving her meticulously coiffed hair and her longtime boyfriend. This is Haifaa Al-Mansour's second film in as many years; she previously directed Elle Fanning in Mary Shelley. (Photo via Tina Rowden/Netflix)

The Land of Steady Habits (Nicole Holofcener): Ben Mendelsohn and Edie Falco star in Nicole Holofcener's adaptation of Ted Thompson's book of the same name, about a man who finds himself floundering after deciding to retire early and divorce his wife in one fell swoop. This is exactly the kind of film at which Holofcener excels; she previously directed Friends With Money and Enough Said. (Photo via Alison Rosa/Netflix)

Like Father (Lauren Miller): Lauren Miller wrote and directed this dramedy about a workaholic ad exec (Kristen Bell) who, after being left at the altar, decides to take her estranged father (Kelsey Grammer) on the trip that was supposed to be her honeymoon. Seth Rogen, who happens to be married to Miller, also stars. (Photo via Emily Aragones/Netflix)

Private Life (Tamara Jenkins): In her first feature film in more than a decade, Tamara Jenkins tackles a painful topic — infertility — with both heart and humor. Private Life tells the story of a couple (Paul Giamatti and Kathryn Hahn) whose struggle to conceive a child leads them to an unconventional arrangement with their step-niece. (Photo via Jojo Whilden/Netflix)

6 Balloons (Marja-Lewis Ryan): Broad City's Abbi Jacobson shows off her dramatic chops as a young woman trying to hold it all together as she cares for her heroin-addicted brother (Dave Franco) and his young daughter. Director Marja-Lewis Ryan also wrote the script for the film, which marked her directorial debut. (Photo via Netflix)

What's your favorite female directed film? Tweet us @BritandCo and check out our Movies page for more inspo.