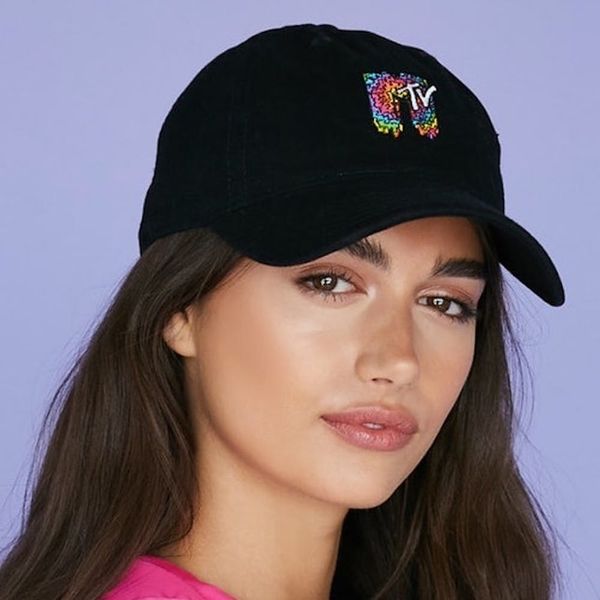 MTV has changed a lot since its glory days of the ’80s and ’90s, but the golden era is about to have a MAJOR revival, and we’re not talking about its recent resurgence of shows such as Unplugged and TRL! Rather, the network’s retro period is being brought back to life on the style front thanks to a brand new throwback collection from Forever 21 that’ll have you saying, “I want my MTV.”

That’s right! The same brand that introduced us to that strange-yet-delightful Taco Bell clothing line is gifting us with MTV x Forever 21, a 15-piece collection for men and women ($13 to $43) featuring bold bright, and budget-friendly threads to make our teenage selves proud.

As Linda Chang, Forever 21 Vice President of Merchandising, said in a press release, “MTV is one of the most iconic networks, and its fans span generations, demographics, cultures and continents. We were very excited to be able to create a nostalgic but modern collection of our customers’ favorite 80’s MTV shows.”

We don’t know about you, but we’re suddenly feeling nostalgic AF! Shop the full MTV x Forever 21 line now in stores and online.

Are you excited about the MTV x Forever 21 collection? Let us know @BritandCo!

Arielle Tschinkel
Arielle Tschinkel is a pop culture junkie who went to NYU because the Olsen twins went to NYU (really). She is a freelance writer whose work has also been featured on HelloGiggles, Refinery29, SheKnows, Bustle, Hollywood.com, and many others; and she's living her dream one Britney Spears GIF at a time. Follow her on Twitter @mrstschinkel or visit her website at arielletschinkel.com.
Collaboration
Style News
Collaboration Fashion Collaboration Style
More From Style News