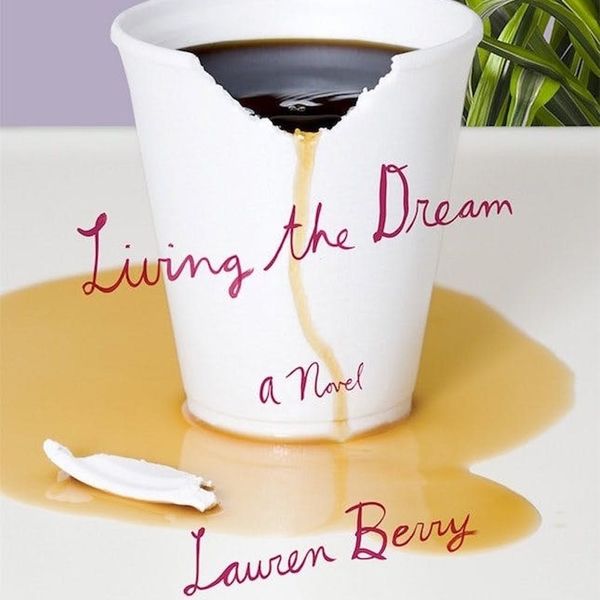 We’re told to “write what you know,” and lots of writers take that to heart: Writers love writing about writers, and artists love creating art about artists. And that’s good, because we love reading about those creative types as they angst, fret, and try to make it in their difficult and unforgiving professions. This week’s book club features three novels about the creatives in our lives; self-referential without being self-indulgent, each is a peek into a fascinating, richly developed world.

1. Living the Dream by Lauren Berry ($17): In Berry’s first novel, two young women try to navigate the waters of London’s artistic world while remaining best friends and not giving up their integrity. It sounds easier than it is. Emma Derringer has big dreams of making it as a writer, and she thinks she’s got the blog followers to do it. However, what’s actually paying her bills is a somewhat soul-deadening job in advertising, the actual particulars of which are beyond anyone’s comprehension. Her best friend Clem (Clementine) just received a graduate degree in screenwriting from Columbia, but instead of the instant success she was hoping for on her return to England, it looks like her terrible ex-boyfriend (an actor) has beaten her to fame. Clem, on the other hand, is now a broke bar hostess with an awesome script in her back pocket; if only she could get someone to actually, you know, read it.

What do you do when you feel like you’re on the cusp of something great, but can’t quite get there? As with most things, the answer is wine, and the company of your best friend who’s feeling the same. Complicating these ladies’ lives is an entourage of temporary lovers and frustrating friends, such as Emma’s roommate Paul, who seems like a human disaster but is actually a rising star in the DJ world, and Yasmin, who proves that sometimes ignorance is bliss.

Things get complicated when Emma has to confront some complicated issues of health and ethics, which of course she does in the very-public context of her blog. (After all, her readers already know about her partying and sex life, so why not?) When artistic fame is largely predicated on people liking you, how do you go about getting it when you’re not completely sure you like yourself? Berry’s heroines view themselves with a refreshingly self-aware and critical eye, and should be #relatable to anyone who’s struggling with identity and success after seemingly doing all the right things.

2. Conversations With Friends by Sally Rooney ($26): If you’re ready for even more real talk from the angsty and creative across the pond, Conversations With Friends delivers the story of the complicated relationships between a group of young artists in Dublin. Frances, a 21-year-old emerging spoken-word poet/communist, is the nucleus around which everything spins out of control. Intelligent but shy, she’s complemented by her equally intelligent but outgoing and transgressive best friend and ex-lover, gorgeous Bobbi.

The two women perform poetry together, and one night they attract the attention of Melissa, a successful, mentoring photographer who wants to shoot them for a profile. She might want to shoot them for another reason later, when Frances’ infatuation with Melissa’s actor husband Nick is returned. To make matters worse, Bobbi has a crush on Melissa. Frances will seem familiar to anyone who’s ever been described as “smart but awkward;” on her way to Melissa’s for the first time, she thinks, “I felt excited, ready for the challenge of visiting a stranger’s home, already preparing compliments and certain facial expressions to make myself seem charming.” Looking at the photos taken of her by Melissa “as if I were a stranger on the Internet seeing it for the first time,” Frances thinks, “even I could see I had character.”

When Frances goes from a more careful consideration of life to trying to live in the moment, she finds this seductive way of life makes it difficult to navigate already potentially fraught friendships. Frances’ relationships with her father, Melissa, and, worst, Bobbi, begin to suffer. This situation may seem cliché, but creative types know that art is all about explaining familiar situations in new ways. Conversations With Friends is written with grace and clarity of voice, and things don’t work out quite the way you’d think they might.

3. The Veneration of Monsters by Suzanne Burns ($17): Some of the best, most captivating art can be described as “escapist,” taking you out of the boring, dreary world of reality. The women in Burns’ collection of short fiction take escapism to a new level, creating, inviting, and, yes, venerating the monsters in their lives. Who needs to deal with isolation if she can work magic?

The stories run the fantasy gamut, and each is wilder and stranger than the next. In Selfie, 30something Violet runs a goth blog and successfully conjures a real vampire boyfriend: But is it for love, or page views? In another story, the man of Cherise’s dreams may be just that — less real than bagging a vampire. The heroine of “Best of Show” is married to the smallest man in the world; perhaps unsurprisingly, her fantasy leads her to consider an affair. Irene, in “Just the Right Kind of Stranger,” is fascinated by violence and those who perpetrate it, coming closer and closer to switching from the victim to the villain.

“Unwound” stars Lara, who takes the old story about the woman with a ribbon tied around her neck (spoiler alert: It’s keeping her head on) to new and grotesque ends. “The Unfortunate Act of Falling” hints to the effect of event and narrative on a town’s self-identity, as housewife Joan obsesses over the change to her town after the death of one of its children. One story is even a sequel to her most popular story (“Tiny Ron”) in Burns’ first short story collection, Misfits and Other Heroes. Burns implies that all of us tell ourselves these kinds of stories; writer or reader, anyone can be the creative type.

What books spark your creativity? Tag us in your next artistic read @BritandCo.