11 Colors You Need in Your Closet This Year 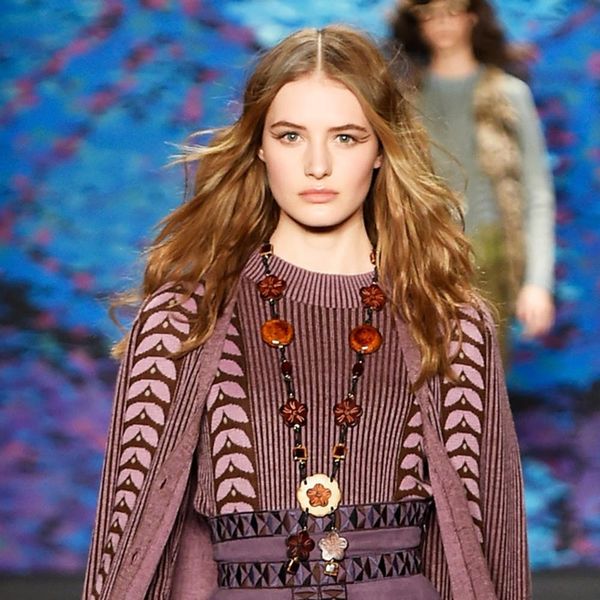 Along with new silhouettes, covetable accessories and to-die-for shoes, a new season means a fresh new color palette to get excited about. NYFW gave us a rich spectrum of moody hues, including all the fall classics plus Pantone’s color of the year, Marsala. A few surprising shades were mixed in, like pale pink and purple, both which carry over from spring, and fresh, sunny yellow made an appearance as well. Scroll on down for 11 of the most need-to-know colors for fall.

1. Moody Blues: While cobalt and navy blue were out en force, it was a dramatic shade of bluish-green on silky satin dresses at Dion Lee, oversized coats at Michael Kors and lady-like lace frocks at Monique Lhuillier that caught our attention. (Photos via Arun Nevader, JP Yim, Frazer Harrison/Getty)

2. Camel and Its Cousins: Earth tones are a fall staple, so it’s no surprise that almost every designer sent at least one look down the runway in a shade of camel, khaki or chocolate brown. A warm winter topper in a natural hue is at the top of our fall must-have lists. A few of our faves? Donna Karan’s military-inspired trench, Jason Wu’s furry khaki number and Altuzarra’s luxe tweed coat. (Photos via JP Yim, Neilson Barnard, Neilson Barnard/Getty)

3. Green with Envy: Between fall’s folksy, bohemian vibes and military-inspired aesthetic, there was plenty of green to be seen out on the catwalk. Designers like A Détacher, Marc by Marc Jacobs and Karen Walker incorporated the color into everything from suede overcoats to boho dresses in shades stretching from hunter green to sage and viridian. (Photos via Brian Ach, Neilson Barnard, Albert Urso/Getty)

4. Marsala: We have to admit, Pantone knows what’s up. Their color of the year, Marsala, made a strong showing on the F/W 2015 catwalks, popping up in Edun, Tory Burch and Proenza Schouler’s lineups. The rich, moody color is perfect for fall — cozy nights in and holiday parties alike. (Photos via Slaven Vlasic, Slaven Vlasic, JP Yim/Getty)

5. Outrageous Orange: Burnt orange is more or less an autumnal standby, but this season the fruity hue is packing major punch. And according to Prabal Gurung, monochromatic getups aren’t just for neutrals anymore. He took the vivid color and created an entire look around it — talk about making a statement. (Photos via P Yim, Slaven Vlasic, Fernanda Calfat/Getty)

6. Pretty in Pink: Designers showed us they weren’t quite ready to let go of spring just yet. Light pastel colors (big for resort and spring) made a gorgeous appearance in more than one collection. Bright pink florals on a two-piece Kate Spade number were reminiscent of spring’s bold patterns, while a luxe pale pink coat at Altuzarra mixed glam winter gear with a hopeful spring hue. (Photos via Mike Coppola, Cindy Ord, Neilson Barnard/Getty)

7. Visions of Violet: From pale shades of lavender to plum and fuchsia, purple was another spring carryover that found its way into the fall collections. Anna Sui put a bohemian twist on the royal hue, while Tibi used it to create contemporary, feminine styles. (Photos via Slaven Vlasic, Brian Ach, Neilson Barnard)

8. Look-at-Me Red: A collection without red is like a show without models — it just falls flat. Bold, bright shades of the vampy color livened up Jason Wu’s neutral-heavy showing and perked up Lacoste’s ’70s-styled sportswear. And what Carolina Herrera collection would be complete without her signature hue? (Photos via Neilson Barnard, Frazer Harrison, Frazer Harrison/Getty)

9. Wintery Whites: Designers like Diane von Furstenburg, Dion Lee and BCBG, plus many more, showed us that some fashion rules are definitely worth breaking, sending numerous all-white ensembles down the fall runways. And not just winter white, either’ we’re talking bright, stark white too. So the next time you catch someone giving you the eye while rocking all white after Labor Day, just tell them DVF gave you the okay. (Photos via Neilson Barnard, Arun Nevader, Frazer Harrison)

10. Mellow Yellow: Yellow felt fresh after collection after collection filled with dark colors and earth tones. We loved the unexpected pairing of a sunny yellow midi with mountain-inspired attire at J.Crew and the mustard yellow floral prints and plaids at Michael Kors. (Photos via Fernanda Calfat, JP Yim, Frazer Harrison/Getty)

11. Gray for Days: Black of course was big, but we’re diggin’ the more laid-back vibe of gray. Body-hugging bodycons at Hugo Boss felt sophisticated in a soft shade, while loosely-layered looks at Wes Gordon and Public School were incredibly cozy, but not at all sloppy. (Photos via Brian Ach, Albert Urso, Brian Ach)

What colors will you be stocking up on next season? Tell us in the comments!

Libby MacCarthy
Libby MacCarthy is an urban planner turned writer with a love (bordering on unhealthy obsession) of all things fashion and beauty related. She lives for perfectly brewed coffee, farmer's markets, dinner parties and perusing impeccably designed boutiques. When she's not on the hunt for the latest trends, you'll likely find her plotting her next adventure or nose deep in a book. Libby currently splits her time between the East Coast and her adopted home of France. Follow her daily adventures on Instagram.
Fall Style
Fashion
Fall Style Fall Trends New York Fashion Week
More From Fashion