This Dating Site Is Redefining What DTF Means 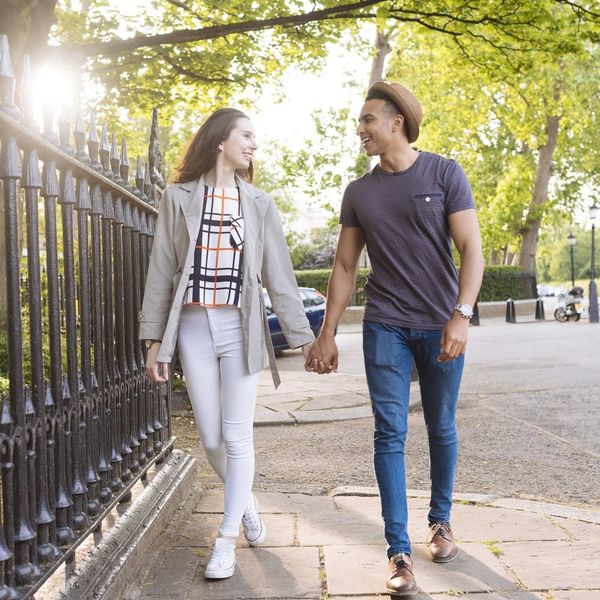 Modern dating has both its pros and cons; online dating and dating apps, for example, have opened up a whole new world of possibilities that include both heartwarming success stories and new types of online abuse. And don’t even get us started on the overuse of cute words to describe horrible behavior. One dating site, OkCupid, is trying to reclaim one of the more sexualized terms/acronyms — DTF — and reinvent it for the better.

In a recent OkCupid poll, 60 percent of users — and almost 80 percent of women — said there was too much emphasis on being DTF in the current dating world. So in early January, OkCupid launched their first-ever marketing campaign “with the goal of subverting the common moniker ‘DTF’ by empowering people to redefine the ‘F’ for themselves,” per a press release. The ads feature taglines like “Down to Feel Fabulous,” “Down to Fly the Red Eye,” and “Down to Forget Our Baggage” alongside striking images reminiscent of pop art. And while we think the ads are pretty awesome in and of themselves, what they represent — the shifting tides of online dating — is even more exciting.

“We set out to really explore what happened to chivalry and courtship, and how modern day dating turned down this other path,” OkCupid’s CMO Melissa Hobley said of how her team developed the statement-making campaign. “Given the current political and social climate, we felt a responsibility and saw an opportunity to play a part in changing the conversation about dating culture. By encouraging individuals to reclaim the term DTF, we’re saying that people who date deserve better.”

Between 2015 and 2017, the number of new OkCupid users who used political language in their profiles was up 1000 percent — which, given the fervor of the 2016 presidential election and its aftermath, should come as no surprise. Additionally, according to Hobley, millennial users in the dating platform’s top cities (based on user numbers) have consistently prioritized political agreement over good sex in their search for love in the months since said election. These stunning stats were the jumping-off point for the DTF program, which launched initially in New York City and other select markets across the country.

“It’s one thing to be open-minded in day-to-day conversations, but when it comes to who you want to date, filtering by politics makes a lot of sense,” Hobley tells us. “Since most people want someone who will share their values system, taking this moment to redefine DTF feels particularly relevant.”

In order to bring these sentiments directly into the actual OkCupid dating experience, the platform has also added a series of DTF-related questions to the more than 3,000 prompts already available for users to find like-minded partners. The dating site has already received a million responses to questions like “Do you think dating apps should be responsible for helping daters become better, more respectful daters?” and “If you were to redefine the F in DTF, what would you replace it with?”

“We think that this campaign will resonate especially with women,” Hobley says. “They are aware that the phrase DTF was used historically in a negative way. There’s power in taking that back and making it yours.”

What do you think of the OkCupid DTF campaign? Tweet us @BritandCo!