5 Tinder Success Stories That Will Restore Your Faith in Love 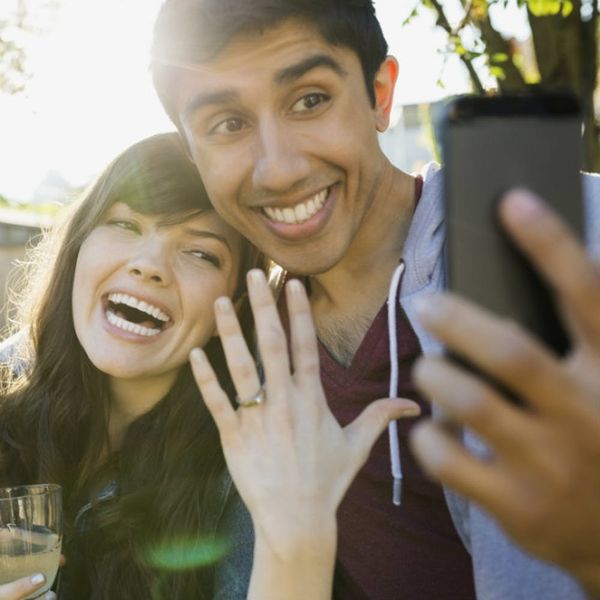 When you spend a lot of your time swiping left, then right and then left again on Tinder and still haven’t found anyone worthy of a first date, it’s completely understandable if you’re starting to feel skeptical about online dating. Meeting someone through an app that you connect with IRL can be a challenge, made harder when you’re wondering if that cutie you’ve been chatting up is even telling the truth in their profile. We totally get it if you’re just craving a break (and some ice cream, of course), but if you’re still feeling the slightest bit optimistic, we have some Tinder success stories that might help you keep your chin up.

Years before they matched on social media (or even knew what it was!), Stefanie and Brett grew up around the corner from each other, but their two-year age gap meant they were never really friends. When Stefanie saw the familiar face in her Tinder feed, she swiped right and found they had matched.

Just six weeks after relocating from her longtime home in New York City to LA, Rachael met Jason on Tinder. At the time, she was chatting with 10 other guys (including Jason’s best friend!), but it became clear that Jason was the right choice. In order to pay respect to their history, he decided to propose to Rachael via Tinder while they were visiting her old stomping grounds in NYC, a plan that was made more complicated by the fact that he couldn’t get their profiles to match again in a different city. Instead, he sent the Tinder message as a text: “Here we are. Back in the place where it all began — a little app inside your phone. But things have changed a bit since we first met there…” When Rachael looked up from her phone, Jason was down on one knee, ready to make it official. Rachael and Jason recently welcomed a baby!

Thanks to busy jobs and grad school, Jenny and Ben were short on time in the years after college, and there was barely room in their respective schedules for love. Jenny had been using Tinder while visiting her parents in Philadelphia, and when she returned to New York City, she forgot to switch back her location, leaving the door open to match with Philly-dweller Ben. They met a few weeks after matching on the app, and ultimately discovered that friends of Ben’s parents had known Jenny’s father years before he had passed away. He even knew stories about her dad! Less than a year and a half after getting matched, Jenny and Ben were married in Philadelphia.

Adriana and Dave’s whirlwind love story culminated in a beautiful wedding just one year after they matched on Tinder. The bride’s advice for others seeking their fairy tale online? Avoid making snap judgments on the first date. “Long-term dating is what becomes a long-term relationship, and you’ll never get there if you don’t give the other person a chance and see how they interact on various dates,” Adriana says. “There’s too much pressure on the ‘first’ of anything. Give the second and third and fourth a chance too.” We’ll take her word for it!

In 2015, travel-loving Erika was enjoying adventures throughout Europe and Southeast Asia when she matched with Jon in Bangkok, Thailand. Just two days after matching, they met in-person at a McDonald’s in Bangkok, but their date lasted way longer than the time it took to grab a burger — they spent five hours getting to know each other that day. Two years later, they’re married and grateful for the fact that Tinder allowed them to find each other when they were far from home.
Alli Hoff Kosik
Alli Hoff Kosik is a freelance writer who is passionate about reading, running, rainbow sprinkles, her lipstick collection, watching embarrassing reality TV, and drinking pink wine. She lives in Brooklyn with her husband and (in her dreams, at least) three golden retriever puppies. Listen to her talk books on The SSR Podcast.
Dating
Relationships
Dating
More From Relationships