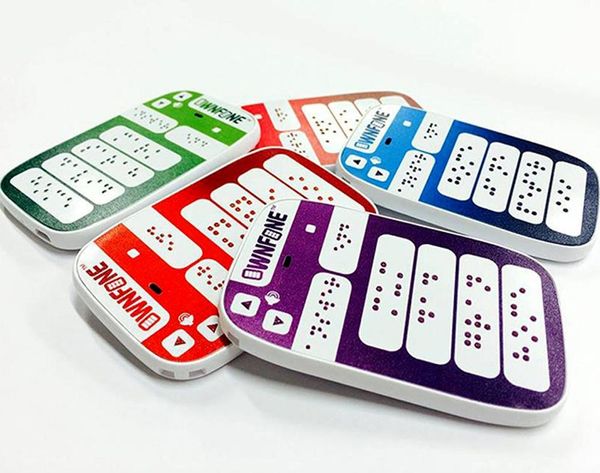 We recently wrote about a device from MIT Media Lab that would let you read a book just by touching your finger to the words on a page. What sounded like a cool idea in general, could have more serious implications for the visually impaired who need a different type of touchscreen in their tech. Apple’s VoiceOver has worked to transform the iOS experience across all devices for the visually impaired, and now UK company OwnFone is launching what they’re calling the first braille mobile phone.

Each phone features a 3D printed keypad and two or four pre-programmed braille buttons. Not only does it earn a point for being the first consumer phone that features braille buttons, the gadget is also made using 3D printing. OwnFone launched one of the first partially printed mobiles in 2012, but this time around the front and the back of the phone are both created using the technique. 3D printing production allows the company to make the phones quickly, cheaply and totally personalized.

Similar to OwnFone’s 2012 models, which were like uncomplicated, customizable (thanks in part to 3D printing) trac-type phones marketed toward kids and the elderly, the braille telly lets you feature names or words on each of its basic buttons. There’s no full braille QWERTY keyboard and it’s far from high tech, but it’s still a first. If you are visually impaired and can’t read braille, OwnFone can also print out raised text on the keypad.

Do you know someone who would find this phone useful or a lifesaver? What other interesting innovations have you heard of recently? Share below!

Lisa Raphael
In her past professional lives, Lisa has served the masses as the Editorial Director at Brit + Co, Bieber Whisperer at J-14, Golden Girls Fan Club Prez at Lifetime and Talk Show Host Understudy to Katie Couric. Now, she's taking on the sports world at The Relish, teaching Hairography 101 in her spare time and will forever be trying to fill the hole Zayn Malik left in her heart.
Tech
More From Tech