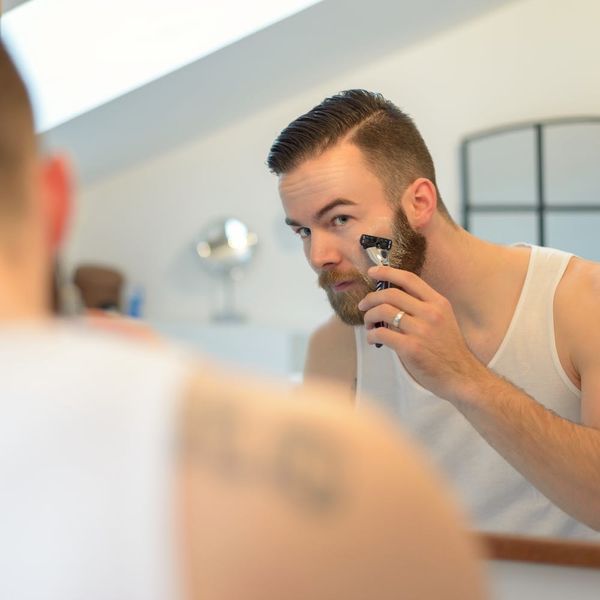 Another day, another round of outrage from the “manosphere” of dudes who just can’t stand to see the misogynist values they hold dear even the slightest bit threatened. This time, a chorus of angry men are losing their minds over a new ad from Gillette (a massive company that makes shaving products used by all genders), which challenges men to ditch their toxic masculinity.

The new ad shows a series of common toxic, obnoxious, and violent behaviors that men engage in that target women, boys, and each other. The ad shows men condescending to women in the office, engaging in sexual harassment, and watching young boys fight while repeating “boys will be boys” like a bunch of robo-dads behind a sinister line of grills. Then things shift, and the ad depicts TV news stories about sexual harassment and #MeToo, as the narrator says, “There will be no going back. Because we, we believe in the best in men.” The ad then transitions to depictions of men intervening and talking to one another about accountability.

The ad has been widely praised for its progressive message by people of all genders. Men’s grooming products tend to be branded in such hyper-masculine strokes as to verge on self-parody. Showing a softer, more ‘woke’ ideal of manliness is striking in this context.

But some so-called men’s rights activists, among others, are offended that Gillette would suggest that men can be something better than groping, condescending buffoons in suits.

Piers Morgan, the British journalist-turned-infamous online reactionary, quickly pounced on the ad for his daily dose of outrage. Morgan claimed on Twitter that although he spends “$1000s” every year on Gillette products, the new ad has thrown him and all fellow male customers “under the PC bus.” He later published a Daily Mail op-ed that cited the ad as evidence of a “war on masculinity” and accused Gillette of wanting men to use the company’s razors to castrate themselves, when in reality, the ad is just saying that men are capable of being decent human beings.

Morgan was far from the only man to get upset (or at least pretend to get upset) over the ad’s efforts to challenge some harmful trappings of masculinity. When Gillette posted the video to Twitter, a barrage of men — and some women — voiced their disapproval. Some even threatened to boycott Gillette products over the ad, which has gone viral in the last two days.

But women spoke up with other criticisms, too. British facialist Caroline Hirons noted on Twitter that Gillette could go a long way in dealing with sexism by making changes to its own products. “Perhaps they could start by looking at their pink ‘Venus’ range for women that includes names like Passion and Embrace and costs more than the men’s ranges for the same thing. Thanks,” she wrote. Hirons was of course referencing the “pink tax,” or the greater cost of products marketed to cis women, and the condescending, overly-feminized design of these products.

If @Gillette really want to make a change perhaps they could start by looking at their pink ‘Venus’ range for women that includes names like Passion and Embrace and costs more than the men’s ranges for the same thing. Thanks.

Others have taken umbrage at Gillette, like so many brands before, leveraging the language of social responsibility to ultimately help their profits.

There may be some legitimate gripes to be taken up with Gillette in light of this ad, but none have to do with the overall message that treating women like lesser beings shouldn’t be acceptable. Gillette says it believes the best in men, but it will take more effort from men, out in the world, before the company’s women customers unilaterally share that belief.

Elizabeth King
Elizabeth King is a politics, history, and culture writer based in the Twin Cities. She is generally pretty cranky but still enjoys traveling, music from the early 2000's, and plotting the resistance. Feel free to say hi on Twitter at @ekingc or check out some of her work at www.elizabethcking.com.
Controversy
Gender Issues
Controversy Feminism
More From Gender Issues