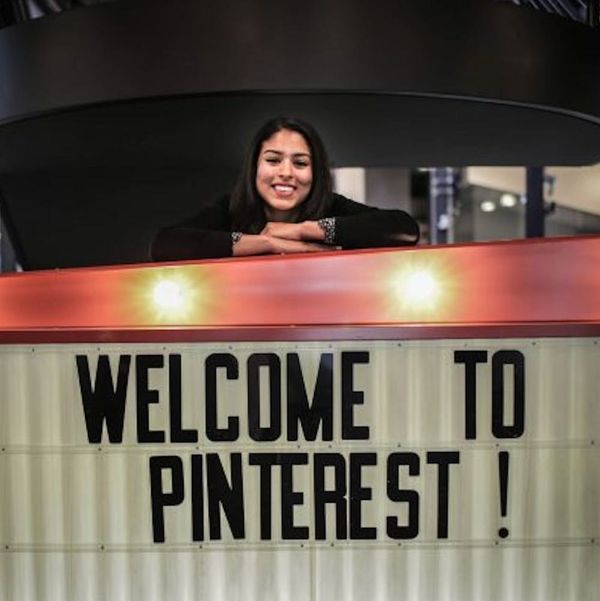 Growing up in the Washington Heights neighborhood of New York City, Madelyn Tavarez never thought about pursuing a career in tech. She didn’t realize that the time she spent customizing her MySpace profile with rudimentary HTML could be the sign of an interest worth following. It wasn’t until years later that a chance encounter with a female engineer, on a trip to Istanbul, inspired her to change paths.

After she graduated from Binghamton University, Tavarez moved back to New York and got a job at a public relations firm while continuing to teach herself how to code during nights and weekends.

“Even though I enjoyed my job, I still felt like the thing I was doing on my own time was what I really wanted to do. And everything we were using at our company was so inefficient,” says Tavarez.

Eventually, she got a call from Pinterest in April 2016 to be a part of their internship program.

“I love Pinterest,” she tells us. “I love the product. I love the culture. It was where I wanted to be, so I knew I would be moving if I got an offer.” It was a match made in heaven.

Tavarez advanced from her internship to become a software engineer for Pinterest’s Android Excellence team, which she remains to this day. But when she got there, she was faced with the realization that there weren’t many Latinas in tech.

“I had heard about [that disparity] before,” Tavarez tells us, “but I thought people were exaggerating and it wasn’t a big deal.” She quickly realized how she’d been mistaken.

Tavarez took it upon herself to become a tech ambassador for the local Latinx community, which eventually led her to partner with Technolochicas — a national initiative of the National Center for Women & Information Technology and Televisa Foundation designed to raise awareness among young Latinas and their families about opportunities and careers in technology. As an ambassador, Tavarez goes to different schools throughout the country and hosts coding workshops, as well as provides the young girls and their families with resources to continue supporting their career possibilities.

“Growing up, I didn’t know anyone who worked in tech. I didn’t know how to figure out what options I had because I didn’t have access to these cool networks. If I could put myself out there and show young girls that there are people like them that have these jobs and explain to them what that means, that felt like a really valuable use of my time,” says Tavarez.

Tavarez plans to be an ambassador and, ultimately, a mentor for life. She explains that one of the many rewarding moments is when these young girls reach out to her on social media and tell her that they want to work at Pinterest one day because before meeting her they might not have even considered that.

Tavarez thinks about what her life would have been like if she had access to an organization like Technolochicas: “I think I would have found my passion much earlier. I would’ve been in a career that I loved earlier. I still feel that I got really lucky because I found it right after college, but maybe if I hadn’t gone to Istanbul and met those women, I would’ve never found it.”

Tavarez is also incredibly active within Pinterest itself. Along with two of her colleagues, she started Todos Pincluidos, the Latino & Hispanic Employee Resource group, a year ago at the start of Hispanic Heritage Month. The overall mission of the group is to celebrate and share the Latin and Hispanic heritage and culture, as well as build a more inclusive community at Pinterest. They recently hosted an internal Help-A-Thon in coordination with WeVote to increase voter education and turn out in November, as well as additional ongoing projects.

All of Tavarez’s work comes down to one thing: representation.

“It matters a lot to see someone that looks like you and is successful,” she says. “Not having access to that can really limit your options and limit the realities that you can create for yourself in your mind. Having Technolochicas and women who are visible is important to help people believe in themselves and have young girls see themselves in these women doing great things. It’s important to have these programs so that young girls can see what’s possible for them.”

How has representation impacted your life? Tell us @BritandCo!

Natalie Zisa
Natalie Zisa is a freelance writer based in New York City. When she's not writing about inspiring women, she's pursuing dance professionally. Otherwise, you can find her searching for free fitness classes, lip syncing to her favorite Italian music, and enjoying her mom's homemade pizza. If she could interview one person, it would be Chelsea Handler.
Empowering Girls
Diversity
Empowering Girls Inclusivity Ladies First Pinterest STEM
More From Diversity