This Kickstarter App Will Turn Your Phone into a Time Machine 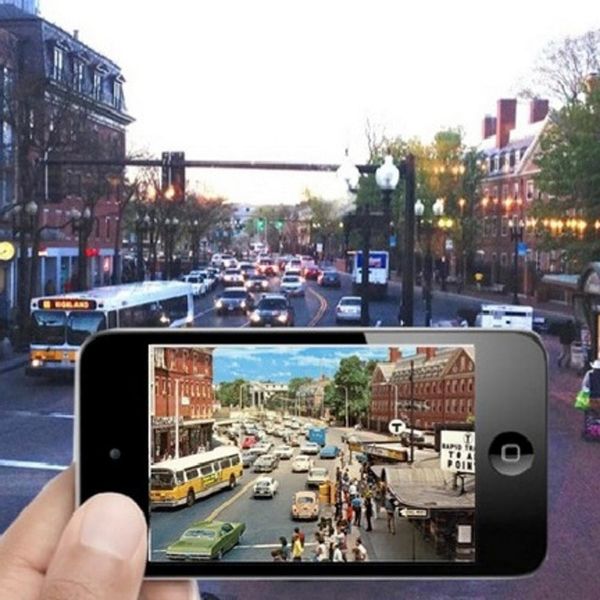 Here’s something we recently discovered: When using Google Street View, you can adjust the image to go back through the photos that Google has taken over the years of that particular locale, and it’s kind of awesome. But what about the places that you want to see pictures of before Google’s van drove around the world? Currently raising funds on Kickstarter, Pivot is an app that lets you see what a spot looked like in the past. Just point your phone or tablet in that direction, and the building, street or field in front of you transforms into history.

Once you download the app, you’ll get notifications whenever you’re around “pivot” points. Simply raise your phone to see what that place looked like at a certain point in time in history — probably in sepia tone. It’s not #TBT or a new Instagram filter — it’s actual history happening right in front of you, whether you’re traveling or right in your hometown.

Creator Asma Jaber and her fiancée Sami Jitan told Wired that they created the app to see Asma’s father’s town from the time when he was growing up. She’s using it as a way to preserve places throughout history using some seriously futuristic technology.

To get all the images, Pivot sources online archives, and they’re hoping people will add photos of their own to the app as well. Pivot’s Kickstarter raised over $33,000 last month, and they’re planning to bring the app to Android and iOS in the fall starting with historic views of Cambridge, Massachussets and Palestine, then spreading to other cities. You can sign up for updates and even to be a beta tester.

What towns do you think have the most scenic histories? Let us know in the comments!

Katelan Cunningham
Katelan is a tech junkie obsessing over all things startup and design. She has entirely way too many apps on her phone and is no stranger to binge-watching. She accidentally fell in love in Los Angeles and that’s where she currently lives, writes, tweets and grams.
Kickstarter
Tech
Kickstarter
More From Tech