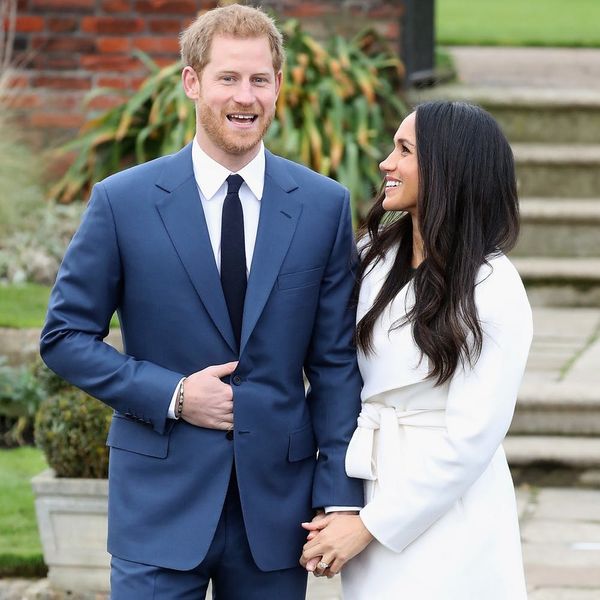 Just one day after the announcement that Prince Harry and Meghan Markle are engaged, the royals have released more details about the couple’s upcoming wedding, including when and where it will take place.

Kensington Palace tweeted out the official announcement on Tuesday: “The marriage of Prince Harry and Ms. Meghan Markle will take place at St. George’s Chapel, Windsor Castle, in May 2018.”

The statement further noted that the Queen has given her permission for the wedding to take place at the esteemed location, and also mentioned that the royal family will be paying for the (surely lavish) affair. More details will follow “in due course.”

The marriage of Prince Harry and Ms. Meghan Markle will take place at St. George's Chapel, Windsor Castle in May 2018. pic.twitter.com/lJdtWnbdpB

The BBC released some additional info about the special day, and the preparation leading up to it, straight from Prince Harry’s Communications Secretary Jason Knauf, saying Markle, who is Protestant, will be baptized and confirmed before the wedding. The American actress also intends to become a British citizen.

As for the big day itself, Knauf said that the pair has every intention of making sure that their wedding “reflects who they are as a couple” and allows the public to “feel part of the celebrations.”

“This wedding, like all weddings, will be a moment of fun and joy that will reflect the characters of the bride and groom,” Knauf added.

JUST IN: Kensington Palace says Prince Harry and Meghan Markle will marry in May 2018 at St. George's Chapel at Windsor Castle pic.twitter.com/oYySoeUw2a

Their choice of venue, St. George’s Chapel at Windsor Castle, is apparently a “very special place” for the duo, who have spent time there together since they first met back in July 2016.

St. George’s Chapel has been the site of several royal marriages and wedding-related events over the years, including the service of prayer and dedication for Prince Charles’ marriage to the Duchess of Cornwall. It was also the location used for the weddings of Harry’s cousin Peter Phillips to Autumn Kelly in 2008, and the Earl and Countess of Wessex in 1999.

We’re still waiting to hear about the surely star-studded invite list and the bride-to-be’s wedding dress, but knowing that the romantic ceremony will take place in such a stunning space is enough to tide us over. We can already imagine how dreamy it will be!

What do you think about the fact that Prince Harry and Meghan Markle are getting married at St. George’s Chapel? Let us know @BritandCo!

Desiree O
Desirée O is a ‘Professional Bohemian’ who loves anything and everything related to the arts, entertainment, and pop culture. She ADORES being a ‘Newsy’ for Brit + Co, covering all of the latest tidbits of awesomeness that you want to read about. When she’s not writing, she’s either making messy art, going on long adventurous walks with her camera, or poking around over at bohemianizm (http://www.bohemianizm.com/). You can find out about Desirée O and her work at http://DesireeO.com/ or follow her on Twitter @DesireeO.
Celebrity Engagement
Celebrity News
Celebrity Engagement Celebrity Wedding Royal Family Royal Wedding
More From Celebrity News