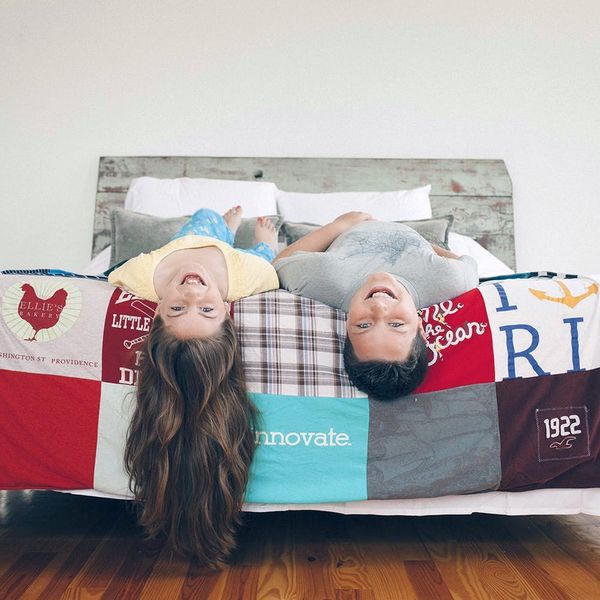 There’s nothing like taking home a stack of Christmas gifts to remind yourself of all the clutter building up in your home. Now that we’re officially in the new year, there’s no more time to fight it — we must face the holiday aftermath and get organized. Sure, cleaning up wrapping paper and party decorations may be easy, but what exactly are you supposed to do with all those memory-packed items that you don’t quite use anymore but would be heartbroken to throw away? Nathan Rothstein and Ross Lohr, co-founders of upcycling giant Project Repat, have a solution that’s eco-friendly, job creating and all-around genius — turn your old memory-filled tees into a custom quilt.

The demand for this product is incredible. “People get shirts for every race they run in, every time they volunteer and every sports team they root for,” Lohr and Rothstein tell us. “People tend to have a lot of memories associated with them, yet they can no longer wear every shirt, which creates the demand for an affordable, upcycled t-shirt quilt.” With the average American stocking around 75 pounds of textiles in their closet, it’s easy to see why this business is taking off. But Lohr and Rothstein, who met during a Social Enterprise business school program at Brandeis University, had no idea this idea would explode so quickly. In fact, after dropping out of school and starting a few failed businesses of their own, this project seemed like a Hail Mary.

The business idea started on the other side of the world in Nairobi, Kenya, where Lohr was pursuing some non-profit education work. After seeing all of the incredible tees that were manufactured in America and shipped off to faraway countries, Lohr had an idea: why not refabricate these ubiquitous tees into usable items and repatriate them back to the United States? After a little trial and error, Lohr and Rothstein finally found their niche in creating custom quality quilts out of their customers’ own used t-shirts.

There was no turning back after that. Lohr and Rothstein quickly learned through flash deal sites like Groupon that the demand was there, and began focusing all of their time on making this project a success. “[It’s] exhausting. And terrifying. And fun,” say Lohr and Rothstein of what it’s like turning an idea in Kenya into a $4 million (and growing) business.

But the business is more than just a money grab for the two social entrepreneurs. “We take a lot of pride in selling a product that doesn’t add additional waste to the world, uses minimal resources and is incredibly personal for our customers.” With hundreds of nostalgic customers tweeting and posting every week about how much their custom quilt means to them, it’s not hard to see why Project Repat is making upcycling trendy again.

How are you staying organized in the New Year? Tweet us at @BritandCo.

Ashley Macey
Ashley Macey is a lifestyle freelance writer who loves all things fitness, wellness, and creativity. When she's not exploring her home in the Pacific Northwest with her dog Max, you'll probably find her curled up with a good book and some hot tea. Follow her daily jaunts on Twitter.
Entrepreneur
Home News
Entrepreneur Upcycle