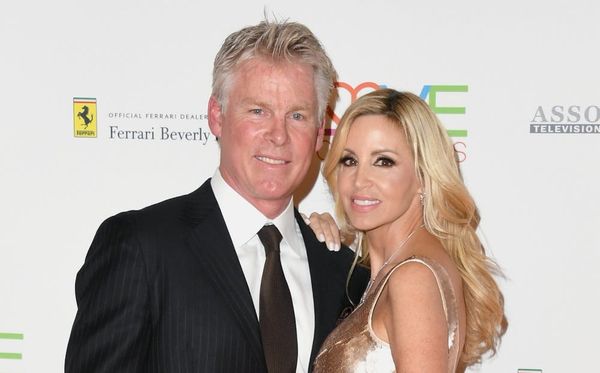 Camille Grammer is married! The Real Housewives of Beverly Hills star said “I do” to her boyfriend, attorney David C. Meyer, on Saturday, October 20, in an oceanside ceremony at a private beach club in Hawaii.

The bride stunned in a white gown covered in statement-making floral lace, which she complemented with diamond drop earrings and a small bloom in her hair. The groom opted for a white shirt and white tux jacket, which he paired with black trousers, a black bowtie, and shiny black Oxfords.

As fellow Housewives Teddi Mellencamp, Dorit Kemsley, and Lisa Rinna looked on, costar Kyle Richards took on bridesmaid duties in a black gown and a huge white flower crown. Sharing a snap of all the ladies looking fabulous on a huge expanse of green, a white tent visible in the background, Richards revealed just how perfect the day was, writing, “When a rainbow shows up at your wedding!”

According to People, Grammer’s two children from her previous marriage to Frasier star Kelsey Grammer also played important roles during the nuptials, as her 16-year-old daughter, Mason, was a bridesmaid and her 14-year-old son, Jude, walked her down the aisle.

The newlyweds, who went public with their relationship in 2016 and got engaged the following year, have already weathered a lot together. Less than two months after saying yes to Meyer’s proposal, Grammer revealed that she had to undergo cancer treatment for the second time in four years. Now, the 50-year-old is focusing on the positive. “This is my next chapter,” she told People. “I’m so excited to start our life together.”

Would you want an oceanside ceremony? Tweet us @BritandCo.