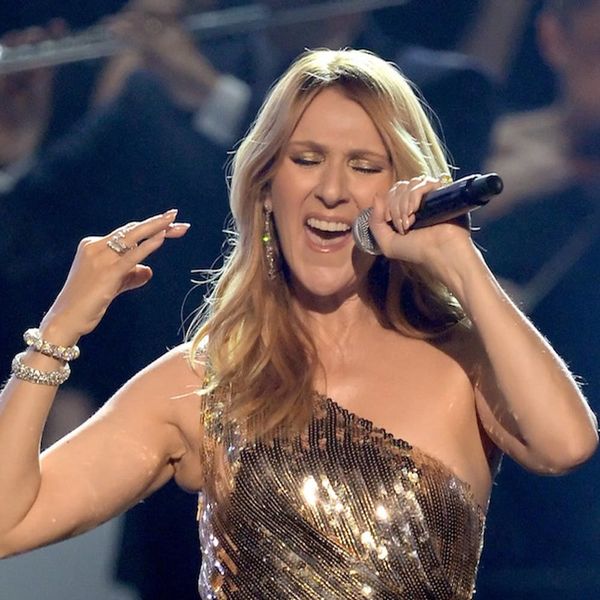 As we careen our way through the ups and (seeminglymany) downs of 2016, one thing remains a constant: Something that feels like it’s been there for you your whole life, and will be for as long as you can imagine. We’re talking, of course, about Celine Dion. Yes, the singer of the Titanic song that’s been burned into your memory from youth. And as she has grown into her wonderfully goofy, tremendously talented self, we’ve grown along with her, and can finally appreciate Celine in ways our younger selves weren’t ready to.

1. She was determined to be a singer since the age of five and has set world records throughout her career. Celine gave her first public performance at her brother’s wedding when she was just five years old, and at just 13, her future husband René Angélil (um, we won’t go there) mortgaged his house to finance her first album. She started setting records out of the gate, primarily in her native land Quebec and in France, and has since become one of the best-selling recording artists of all time. Not bad, Celine — not bad at all. (Image via Giphy)

2. She’s part of a cabal of badass Canadian women who ruled the music industry in the 90s. Okay, so it’s not really a cabal, but between 1993 and 1997, Celine — along with Shania Twain, Sarah McLachlan and Alanis Morissette — dominated popular music globally and became some of the best-selling artists Canada had ever seen. In fact, there’s even a book about it. You should read it. (Image via Giphy)

3. Celine is just so funny and goofy and awkward and we love it. Have you ever heard her speak? Seen her perform? There’s a deep, carefree earnestness to the way Celine carries herself that you can’t help but love, even if if makes you cringe. (Image via Giphy)

4. She had a secret handshake with her husband. Celine met her future manager and husband Rene when she was just 12 and he was 38, and while the two maintain that no relationship existed until Celine was 19, their age difference has always drawn interest. When Rene died of cancer in January, the world mourned with Celine. At the funeral, when saying her final goodbyes at his casket, she did their secret handshake, which they were seen doing a number of times (as above). Gah.

5. She built a waterpark at her house. Because why not?

6. Her Vegas residencies are credited with revitalizing the city’s entertainment scene. Once considered a last resort for washed-up artists, the residency scene in Vegas is now booming thanks to Celine’s blockbuster Vegas shows. “Celine redefined what artists can do in Las Vegas, helping to make it arguably the busiest entertainment city in the world,” Gary Bongiovanni, President and Editor-in-Chief of Pollstar, has said. Elton John, Britney Spears, Mariah Carey, Shania Twain and many more have opted for Vegas residencies over tours.

7. She freaking SLAYED on Jimmy Fallon’s “Wheel of Musical Impressions.” Not only did she nail Rihanna, Sia and Cher singing impression, but she had the moves to match. Because she is the best.

8. She had the most viral fashion moment of 2016. When Celine stepped out of her Paris hotel in this oversized Titanic hoodie (which was revealed to be an $885 Vetements piece), the Internet freaked, proving our hearts will always go on.

Are you a secret Celine Dion fan? Let us know over at @BritandCo!