16 Scrumptious Ways to Introduce Bourbon into Your Cooking 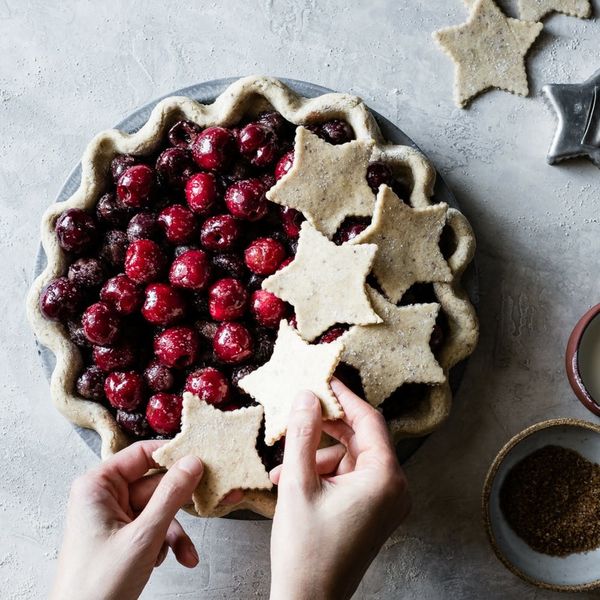 Holiday feasts are meant to be filled with joy, laughter, and (more often than not) a heavy hand on the alcohol bottle. Instead of enjoying the good stuff alongside your food, why not add it right into your meal? Click through for boozy starters, sides, entrées, and desserts that make those snifters almost unnecessary.
Bourbon Butterscotch Pudding: Homemade butterscotch pudding is a cinch. Add a little bit of challenge — and a lot of flavor — with a splash of bourbon. (via Goodie Godmother)
Roasted Sweet Potatoes With Bourbon Maple Butter: Think of this as the grown-up version of sweet potato casserole. Crispy pint-sized 'taters are perfected when sprinkled with toasted pecans and drizzled with maple butter sauce. (via Half Baked Harvest)
Spiced Bourbon Cherry Pie: Gluten-free but surprisingly delicious, this pie is kissed with whiskey, sprinkled with a hint of cinnamon, and dashed with chile for a flavorful dessert that will clearly be the star of the show. (via The Bojon Gourmet )
Bourbon Soaked Cherries: Why would you buy Maraschino cherries when you could soak your own in bourbon, honey, and spices to make the greatest drink garnish your friends have ever had? (via Gimme Some Oven)
Brussels Sprouts With Maple Bourbon Glaze: This side dish is not time intensive or terribly difficult, and can be prepared in advance. Plus, this recipe gives you an excuse to make your vegetables a little more interesting. (via Our Salty Kitchen)
Bourbon Vanilla Ice Cream: With only four ingredients and no churning required, this tempting treat is an easy year-round favorite. Not to mention, each bite of ice cream is studded with flecks of vanilla and laced with warm ribbons of bourbon. (via The Chunky Chef)
Bourbon Chicken: This satisfying dish is inspired by the flavors of Bourbon Street in New Orleans. Covered in a slightly sweet sauce that has a little kick, it'll warm you up from the inside out. (via Kitchen Trials)
Bourbon and Brown Butter Peach Crisp: If you like recipes that you can use year-round, this one's a keeper. Substitute peaches for pears or apples as the seasons change and then layer them together with vanilla bourbon sauce, a crumble top, and fresh vanilla ice cream. (via The Bojon Gourmet)
Slow Cooker Bourbon Baked Beans: This simple side hits all the requisite baked bean flavors: brown sugar, molasses, mustard, Worcestershire sauce, onion, and bacon. The only difference is a splash of bourbon, but trust us; that little change only makes a tried-and-true staple even better. (via Spicy Southern Kitchen)
Bourbon Bacon Barbecue Chicken Kebabs: The three Bs that make food mouthwatering — bourbon, bacon, and barbecue — ensure that this one will be a crowd-pleaser. Just be sure to make extra sauce. (via Cooking With Janica)
Bourbon Glazed Meatloaf: Forget everything you thought you knew about meatloaf. Drenched in a sweet and spicy bourbon-whiskey glaze, this meatloaf is begging to be served to even the pickiest of eaters. (via The View from Great Island)
Pineapple Bourbon Barbecue Sauce: If you're looking for something that really packs a punch, this sauce is it. One taste and you'll experience a mouthful of honied bourbon laced with chili powder, and then a soothing sweetness to calm it all down. You and your guests will be reaching for more. (via Cooking With Curls)
Bourbon-Honey Glazed Ribs: As long as you get the sauce down, you don't have to be a grill master to get fall-off-the-bone, melt-in-your-mouth ribs each and every time. (via Nerds With Knives)
Kentucky Bourbon Butter Cake: Rum cake has probably been a family favorite for years, so why not shake things up and add a splash of bourbon instead? It'll accentuate the buttery flavor that makes this cake so delectable. (via Brown Eyed Baker)
Chocolate Bourbon Pecan Pie Cupcakes: Hard-core chocolate lovers, rejoice! Now you can have bourbon chocolate pecan pie year-round in cupcake form. They take a little time to assemble, but the results are *so* worth it. (via Half Baked Harvest)
Chipotle Bourbon Pumpkin Chili: Sweet butternut squash and corn bring out the smokey bourbon in this chili. That along with the heaping addition of beans give this chili enough heartiness that you won't even miss the meat. (via The Endless Meal)

Tag us in a photo of your favorite bourbon recipe on Instagram @BritandCo!