‘Rent: Live’ Reunited the Original Broadway Cast for a Powerful Performance of ‘Seasons of Love’ 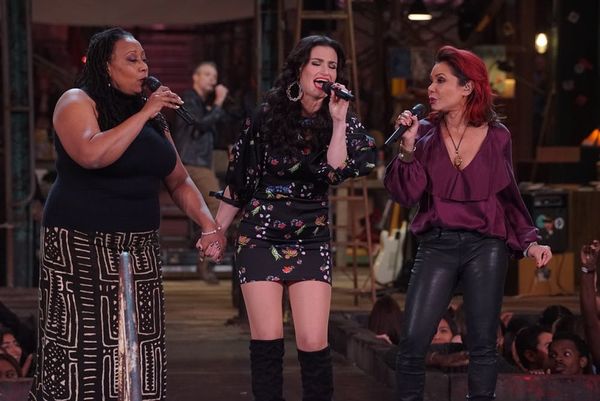 Despite the majority of Fox’s Rent: Livebeing a pre-taped production, some of the most memorable moments from the TV musical were the live portions — including a very special original Broadway cast reunion that had us crying 525,600 tears.

Following the final song of the show, a dedication to the show’s creator, the late Jonathan Larson, played on screen. Then, the camera panned to another stage, where the curtain rose and the show’s original cast members — Idina Menzel (Maureen), Anthony Rapp (Mark), Adam Pascal (Roger), Daphne Rubin-Vega (Mimi), Jesse L. Martin (Collins), Wilson Jermaine Heredia (Angel), Fredi Walker (Joanne), and Taye Diggs (Benny) — were standing side by side to belt out one of the show’s most iconic songs, “Seasons of Love.”

They were then joined by the stars of Rent: Live, who paired up with their respective Broadway counterparts to finish the song.

The moving moment was one of only a few live scenes during Sunday night’s special. Viewers learned early on in the show that most of the broadcast would be footage from the dress rehearsal, due to star Brennin Hunt, who plays Roger, suffering a broken foot on Saturday.

“Last night during our performance in front of a live audience, one of our cast members sustained an injury,” Vanessa Hudgens, who played Maureen, explained to the audience following the first commercial break. “A visit to the hospital confirmed that Brennin Hunt, our Roger, broke his foot and will be unable to perform tonight.”

“But Rent has always been about community, resiliency, and bouncing back,” RuPaul’s Drag Race star Valentina, who played Angel, added. “So the show must go on.”

We’re glad it did — if for the final performance of the night alone.

What did you think of Rent: Live? Let us know @BritandCo!