Why Most of ‘Rent: Live’ Isn’t Actually Live 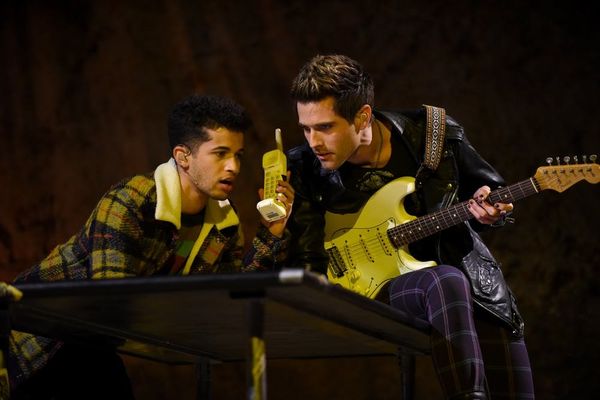 Viewers tuning in to Fox’s Rent: Live on Sunday, January 27, may have been disappointed to learn that most of the performance was actually pre-taped. Producers were forced to scramble to come up with a solution at the last minute after Brennin Hunt, who plays Roger, broke his foot during Saturday’s dress rehearsal.

“Last night during our performance in front of a live audience, one of our cast members sustained an injury,” Hudgens, who plays Maureen, explained to the audience. “A visit to the hospital confirmed that Brennin Hunt, our Roger, broke his foot and will be unable to perform tonight.”

RuPaul’s Drag Race star Valentina, who plays Angel, then piped in: “But Rent has always been about community, resiliency, and bouncing back, so the show must go on.”

Unfortunately, since Hunt is in a wheelchair and the production doesn’t have any understudies, the only way that could happen was through pre-recorded footage from Saturday’s dress rehearsal. “Most of what you’ll see tonight comes from last night’s performance, but we have all rallied together to rework the final act so all of us can perform it for you live,” explained Fisher, who plays narrator Mark Cohen.

Executive producer Julie Larson — the sister of Rent‘s creator and composer, the late Jonathan Larson — addressed Hunt’s injury prior to the broadcast, saying in a statement that the spirit of the show was stronger than ever. “The experience of putting together this beautiful new production of my brother’s work, while emotional, has been truly joyous for all of us. This new cast has embodied the spirit of the show from day one and they embraced Brennin with positive and uplifting love in his moment of need,” she said. “Rent has always been about resilience and community. I speak from my heart when I say that we have a spectacular show for you tonight. We can’t wait for a new generation to experience Jonathan’s legacy.”

Are you watching Rent: Live? Tell us @BritandCo!