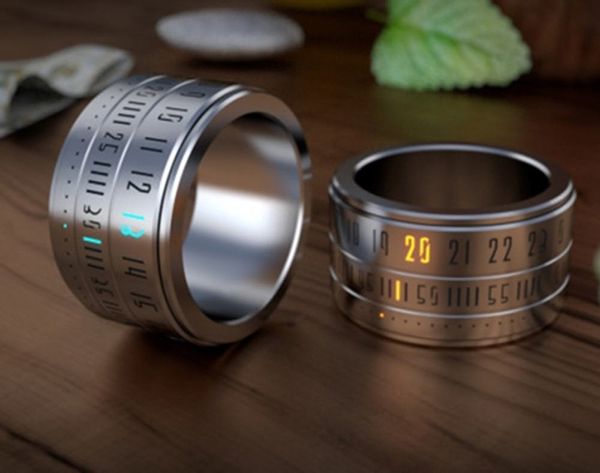 If you hate wearing a watch, and you feel rude pulling out your cell phone to check the time in meetings or at dinner with your friends, there’s finally a solution coming—a ring watch. If that phrase conjures up an image of something like this, be prepared to be pleasantly surprised.

A new campaign on Indiegogo, this incarnation of the ring watch is nothing like the ones you might have worn when you were younger. Instead, it’s a sleek metal band that shows the time via LED lights. You might have seen this design floating around the Internet a couple of years ago, but that was just a concept, this time it’s going into production—assuming they reach their funding goal, of course.

So how does it work? The clock is actually activated by touch, but it’s not just by tapping it—otherwise it would turn on and off each time another finger bumped it. Instead, you have to rotate the ring on your finger to turn it on. Once on, the LED displays light up with the hour on the top rung, and the minutes (marked on the fives and with hash marks in between) on the bottom rung. It’s a stylish and discreet way to check the time when you’re out with friends or in a meeting.

The only bad part right now is that you’ll have to charge it. We know, we know another gadget to charge, but future iterations of the design will work with kinetic energy instead. So just by typing or wearing it while you walk or give a presentation will make sure your ring keeps its time.

Check out the ring in action in the video for the Indiegogo campaign.

Would you wear a ring that tells time? Tell us in the comments, and submit your fave recent project from Indiegogo using the form below.

Kristin Appenbrink
Kristin combines her love of words, a passion for creating, and a drive to learn new skills. Plus, as an obsessive ice cream maker and storyteller she always has a scoop to share.
Design
Tech
Design indiegogo Jewelry